Council urged to give street space to shops and cafés 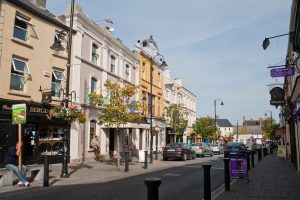 LAOIS County Council has been urged to give public spaces to shops, cafés and other outlets, as businesses try to recover from the Covid-19 lockdown.

Cllr Mary Sweeney led the calls yesterday at a meeting of Portlaoise Municipal District, as she asked the council to “re-imagine how public spaces can be used” in what is the new norm of social distancing.

The Ballyroan councillor said retail and hospitality in Portlaoise and other towns would need all the help they could get during the challenging times ahead.

She said: “We have to think a little differently now, in what is being called the new normal and re-imagine public spaces. We need to give people every opportunity to reopen their businesses. Could on-street businesses be given public space to help them reopen? Could vacant spaces be utilised? Small businesses have been very much decimated and some may never come back. They need huge support.”

Director of services Simon Walton said the council was well aware of the devastating impact of Covid-19 on society generally and particularly on local businesses. He stressed that there are supports from Enterprise Ireland and Laois Enterprise Office (LEO) but there are other supports that councillors might wish to consider. He pointed out that parking charges and commercial rates had already been waived, to help the recovery.

Mr Walton said that retail and hospitality, including cafés and restaurants, were particularly hard hit by the Covid-19 lockdown. As part of a bid to support the local economy, the county council plans to convene a meeting with Downtown Portlaoise, Laois Tourism and other agencies, to look at how business recovery can be supported.

Cllr Sweeney said the council did tremendous work in response to the crisis and gave people great support, including community work and delivering library books to people who were cocooning. However, local businesses would need huge support now and the council should consider everything possible, including a mobility plan and giving over public spaces to businesses, at a time when footfall would be reduced due to social distancing and more space would be needed for queuing.

Cllr Willie Aird said he would be “very nervous” going forward and asked whether the LEO could have a dedicated person to deal with businesses re-opening. He said: “I’d ask if people in the LEO can talk to people who may be a bit ‘iffy’ about reopening businesses. They need someone to talk to in terms of what they can do going forward.”

Referring to a letter from Downtown Portlaoise, cllr Aird added: “We have to listen to the people who are on the ground and support them whatever way we can. I have to say that Laois County Council couldn’t have done any more over the past two months. If you tried to criticise them you couldn’t. Maybe it’s the first time ever for me to say that!”

Cllr Catherine Fitzgerald agreed with Cllr Sweeney’s suggestion about public spaces, saying that businesses such as cafés and restaurants should be given space outside for customers, something that would help with social distancing. After two months of lockdown, people needed to socialise and meet for a cup of coffee and it should be made as easy as possible.

Cllr Fitzgerald commented: “There are a lot of worried business people in our town. They are really anxious to get up and going and the longer this goes on, the harder it will be for businesses.”

Using Main Street in Portlaoise as an example, Mr Walton said there are 3,000sq.m of public space between the courthouse and the former Shaw’s site and between 75% and 80% of that space is taken up by cars. He said it would require a statutory resolution by councillors to change that, which would take about a month, but there was a possibility that some public space could be allocated to businesses in the meantime.

Mr Walton said that, if a café wanted to put tables and chairs outside, they must apply to the county council for a licence but they would not be charged the usual licence fee of €125 to €150 per table, given the current requirements for social distancing and more space. The council would also have to look at issues such as mobility and disabled access.

The director of services said: “There may be a possibility of allocating some space on Main Street to businesses. It might involve reassigning two or three parking spaces for a table and chairs. However, there are some issues such as mobility and access for blind and disabled people. Nearby premises might also need the outside space for queuing, so we need to look at this in terms of balance. The reality is that, in the new normal, people need to feel safe and confident or they will not come into the town centre, so a number of issues need to be considered.”

Cllr Noel Tuohy said it was hard for businesses to get going again, especially under the new rules. He said: “I’d urge people to come in and get a cup of coffee and support local business. This isn’t about politics. It’s about supporting Laois and Portlaoise and supporting local business.”