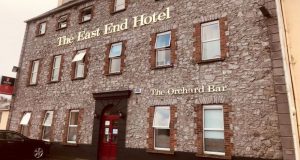 The former East End Hotel in Portarlington that is now used to accommodate asylum seekers.

Testing of those residing and working in the four facilities that accommodate asylum seekers and refugees in Laois should be carried out immediately.

That was the demand from Laois Fianna Fáil TD Seán Fleming.

He said that there is excess unused testing capacity in Laois and that it made sense for it to be used to test everyone in The Montague Hotel in Emo, The Hibernian Hotel in Abbeyleix, The East End Hotel in Portarlington and the Commercial Inn in Rathdowney.

‘One way to protect all these people is to carry out routine testing.’

Deputy Fleming said: “We know there have been outbreaks and clusters of COVID-19 in some Direct Provision Centres putting both the residents and the employees at risk. One way to protect all these people is to carry out routine testing and to do so on an ongoing basis.

“The capacity is there. There are some testing centres lying idle across the country. Laois has excess unused capacity and there are plenty of healthcare professionals who are ready and waiting to carry out tests.

“The Minister needs to direct the testing of all Direct Provision residents and employees immediately.”