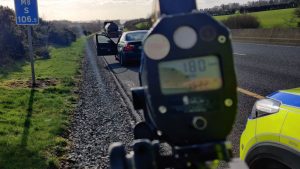 MORE than 180 drivers were caught speeding within the first few hours of National Slow Down Day this morning.

They included a motorist who was clocked doing 124km/h in an 80km/h zone, soon after the nationwide road safety day dawned.

Between 7am and around 11am this morning, gardaí and GoSafe speed vans have checked the speed of 22,500 vehicles, as part of the 24-hour National Slow Down Day that will continue until 7am tomorrow.

Figures released by gardaí mid-morning showed that a total of 181 vehicles had already been caught travelling above the applicable speed limit.

The RSA says that the higher the speed, the greater the likelihood of a collision and the more severe the outcome of that collision. As a general rule, a 1% reduction in average speed will bring about a 4% reduction in fatal collisions, which is why reducing motorists’ speed is essential to improving road safety.

A garda spokesperson said: “National Slow Down Day, An Garda Síochána and the RSA continue to remind drivers of the dangers of speeding and urge motorists to drive carefully and abide by the speed limits.”