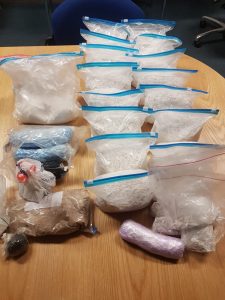 XANAX tablets, heroin and other drugs worth a total of €237,000 have been seized by gardaí in two separate searches.

Two men were arrested in connection with the planned drugs raids and are still detained for questioning today.

The first search at a house yesterday morning uncovered about half-a-kilo of heroin, with an estimated street value of €70,000. A man, aged in his 40s, was arrested at the scene.

The second search yesterday, at an industrial premises, found quantities of heroin, Xanax tablets, ecstasy and cocaine (pictured) worth an estimated €167,000. A man, aged in his 30s, was arrested.

Both searches in Cork city were carried out by gardaí attached to the Cork City Divisional Drugs Unit.

The first man was taken to Mayfield Garda Station, where he is still detained today under Section 2 of the Criminal Justice (Drug Trafficking) Act, 1996. The second man is currently detained at Togher Garda Station under the same legislation.

Gardaí say that both men remain in custody for questioning and investigations are ongoing.