Arles pupils – A step ahead of others 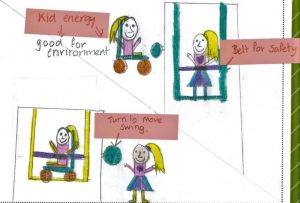 Pupils from Arles National School who were awarded the STEPS Young Engineers Award for their *Let’s All Play Together* project entry which sought to develop an inclusive playground where all children could play together.

PUPILS from Arles National School have been awarded the STEPS Young Engineers Award for their Let’s All Play Togetherproject entry which sought to develop an inclusive playground where all children could play together.

The Brilliant Builders third and fourth class Arles team comprised of Àine, Aoife, Katie, Rìan and Rosie devised their Let’s All Play Together project after noticing that children in wheelchairs have no swings or playground equipment in their local area. The students wanted to make a change and came up with the project to create a wheelchair-friendly swing powered by Kid Energy which would allow all children to play together.

Now in its second year, the STEPS Young Engineers Award encourages third and fourth class pupils and their teachers to explore the world of engineering by developing an engineering project that would help to improve their local community. The award is one of four primary and post primary student engineering initiatives coordinated by Engineers Ireland’s STEPS programme – funded by Science Foundation Ireland, the Department of Education and Skills and industry leaders ARUP, ESB, Intel and Transport Infrastructure Ireland (TII).

Participation in the primary school competition has doubled since its inaugural year, with over 200 schools submitting over 600 entries to this year’s competition. Eight school teams were short listed for this year’s competition final, with the winners announced today at a virtual awards ceremony on Engineers Ireland’s website and YouTube Channel, which also included an Engineering Spectacular show by Mark Langtry, Head of Science and Sport at Explorium.

Engineers Ireland’s STEPS team is now calling on volunteer engineers and engineering organisations to help make the students’ project ideas become a reality. For more information and to get involved in the STEPS Young Engineers Award, visit: https://www.engineersireland.ie/Schools/Get-involved/Young-Engineers-Award