Plans for 67 housing units in Portlaoise go on display. 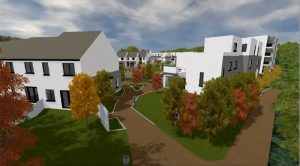 The draft layout of the housing development planned for the old CBS school grounds in Portlaoise.

PLANS for the redevelopment of the old CBS school grounds in Portlaoise go on public display from tomorrow (Wednesday 27 May).

Agreement has been reached between the three main parties involved in the development, Adrian Developments, Cluid Housing Association and Laois County Council, to proceed to the next stage of the project.

The proposed development is located on a five acre site, beside Portlaoise Train Station and close to the town centre.

In  total 67 housing units will be developed 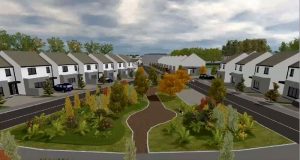 The housing units will be owned by the Housing Association, while the car park will be operated by Laois County Council.

Councillors were informed at their May monthly meeting by the council’s head of housing Joe Delaney that the public have until 24 June to submit their views, suggestions or objections to the plans and that a further two weeks to make submissions to the council planners until 8 July, before the Council’s Chief Executive report on the proposed development is placed before councillors at their July meeting for their input.

Mr Delaney said that a new online facility has been established for those who wish to make submissions to the plans and can be accessed by logging onto consult.laois.ie from tomorrow and that postal submissions will also be accepted.

‘A flagship for the town of Portlaoise’ 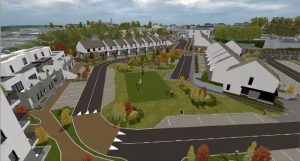 A draft sketch of the housing development on the old CBS school grounds in Portlaoise that will go on display tomorrow.

Cathaoirleach of the council cllr Willie Aird described the proposed development as “a flagship for the town of Portlaoise and I am delighted to see the grounds being used for this reason.”

“This is good news for Portlaoise,” said cllr Catherine Fitzgerald. I am glad to note that the car park will remain under the control of Laois County Council.”

Cllr Noel Tuohy said: “It a fantastic location. It’s a great day for the town and will be great for the people who are going to move and live in that area.”

Cllr Caroline Dwane Stanley also welcomed the news and said that the council, “could badly do with the revenue that will come in from the paid parking in the area.”