Aengus is taking to the road for Spinal Injuries Ireland 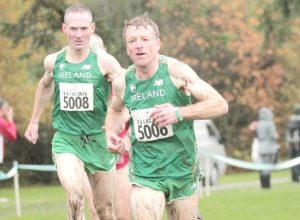 THIS coming Sunday Aengus Burke will combine his two great sporting loves to raise funds for Spinal Injuries Ireland by doing a sponsored run. Over the past few months, like all of us during this pandemic, and particularly those more active amongst us, Aengus has been very curtailed in what he would do.

He still is but has found a way around the limitations when on Sunday he plans on running 21 miles, starting at Rossleighan Park at 10am. Normally 21 miles would be nothing to Aengus who regularly can seen out pounding the highways and byways whether in training or competition, which he travels to all over Ireland and indeed in Europe.

On Sunday Aengus is taking a route that will bring him back to Rossleighan approximately every 22 minutes. The U/16 team that Aengus trains is meeting at the same time also. They will knock around a ball and join him on a relay basis for the duration of the run.

The other Portlaoise AFC juvenile teams are also meeting on rota basis and will be joining him on a lap of the pitches each time and all abiding to current guidelines.

“All proceeds to my old friends in Spinal Injuries Irl, who like a lot of charities are struggling at present,” said Aengus this week.

“I know the consequences of a spinal injury and appreciate the work done by Spinal Injuries Irl. I suffered a spinal injury in 1984 but luckily made a full recovery, others are not so lucky,” added Aengus.

Picture the scenario – you are 18 years of age and your dream has just come through, you have signed for Shelbourne FC; that Saturday you play a game with the B team; the following day to you go watch your home town club, Mountrath play in Castledermot; on Monday you wake to find yourself strapped to a bed in hospital and told you might never walk again.

Back in 2017 Aengus spoke to the Laois Nationalist about his accident and the consequences and also about how sport played a major part in his recuperation.

Aengus Burke was always into sporting activities for as long as he can remember.

“My father was a GAA man and I’d go to games but when my brother started to play soccer I follow him and I’ve loved it ever since,” explains Aengus. “I just Loved the sporting lifestyle, if it wasn’t soccer, I’d be off cycling or running. I was always out and about.”

It had always been Aengus’ dream to play League of Ireland soccer and in November 1984, at the age of 20, Aengus was signed by Shelbourne. But within days his life was to change dramatically.

Aengus explains: “I was driving home from Castledermot and skidded and went across the main Dublin/Limerick road. The car ended up in a field. There four others with me and one or two had some minor cuts. After the crash I wandered around the field for a while before climbing a gate out onto the road. A passing motorist then gave us a lift to hospital.

“In the hospital I was put sitting down while they treated one or two others. The next thing I wake up the next morning strapped down and wrapped in tin foil on a trolley in Portlaoise Hospital with my father, brothers and sister standing around me. We were waiting on a helicopter to take me to the National Rehabilitation Hospital (NRH) in Dublin.” 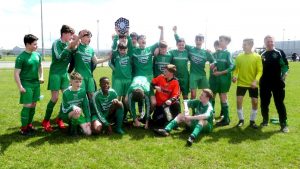 Some might say Aengus’ recovery was something of a miracle, he says: “It was a massive stroke of luck, someone in Portlaoise hospital made a great call. I woke up two or three days later in Dublin and started to scream and roar, I hadn’t a clue where I was.”

It subsequently emerged that Aengus had a severe injury to his neck and was told there was a possibility he might not walk again.

However, he adds, the doctors were very positive that if things went well over the first few days the prognosis was that he would recover.

Thankfully, they were right.

Aengus initially felt a lot of self-pity over his injury but the fighting spirit that has seen him achieve so much in his sporting exploits began to show itself.

He spent from November 1984 to April 1985 at the NRH and for four months was confined to bed but by the end of March he began to regain the use of his hands and legs.

“I knew (now there’s determination) I was going to be back walking inside a year. I was in the bed until the end of March the next year and I was discharged from the NRH at the end of April.

“I had full use of my arms and legs but my muscles had deteriorated a lot from lying around so I had to build them up again on the bike.

“After a few weeks I built up more strength and I carried on from there. I used to be quite fit so that helped with my recovery otherwise it would have been a struggle. Because I loved training so much, I didn’t see doing exercise as a punishment.”

That was all of 35 years ago and still Aengus can be seen pounding the streets and roads around Portlaoise where he has been living for the past 30 odd years.

Portlaoise AFC, says Aengus, had a “super team” at that time and no sooner was he out of hospital than he was back in the thick of the action. And while he never made it back to the League of Ireland, he came close to it.

“In 1991 when we (Portlaoise AFC) qualified for the Senior FAI Cup for the only time in the club’s history, I was captain. We drew Home Farm at home in Rossleighan Park and we beat them 3-1,” explains Aengus.

What he is too modest to say is that he scored one of those goals.

“It was a dream come true. I still have the video of the game at home. You couldn’t have asked for better. It was real Roy of the Rovers stuff.”

So when did he change his football boots for running shoes?

“I used to do a bit of running, a couple of times a year. Come the Laois cross-country season Eileen Hayes would ring me to know if I was available to maybe make up a team. Some Sundays I’d play soccer in Dublin in the morning and come home and run in the afternoon.”

The birth of his son David coincided with Aengus hitting the big 40 so he decided to hang up his boots.

“That year I decided to run the Dublin Marathon in aid of Spinal Injuries Ireland. I found I liked it and was fairly successful at it, and I decided to give it a go. I started to do fairly well and the bug bit, and I’m still at it.”

“I have been part of medal winning Irish teams in the British and Irish cross country races, and in May 2016, I was a scoring member of the Irish over-50 team that took silver at the European Masters half marathon in Portugal.

“I have to honestly say that when I started running at 40 that I thought I would one day wear an Irish singlet or represent my country.”

But while he has been training for his running, there has always been that love of soccer, and now that manifests itself as a coach.

“I did a bit of coaching years back but gave it up, Then when my son started playing I got back into it and I’m doing that now with the under-14s in Portlaoise. I love doing it because over the years you create a great bond between yourself and the lads and that’s a great feeling.”

Aengus recounts how doctors had told him that the reason he didn’t suffer more serious injuries originally was because he was so fit. And that hasn’t changed.

“I try to get in two sessions a day. I don’t have to force myself, it’s not a chore, I love it. I know people in their 70s who run marathons. My ambition is to keep going and get another 20 years out of it.”

And I wouldn’t bet against it.

To support Aengus donations can be made through the following link https://give.everydayhero.com/ie/portlaoise-afc-aengus-burke