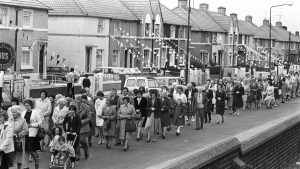 A Corpus Christi procession from a bygone era
Photo: Courtesty of the Irish Times

IN 1263, a German priest, Fr Peter of Prague, made a pilgrimage to Rome. He stopped in Bolsena, Italy to celebrate Mass at the Church of St Christina.

At the time he was having doubts about Jesus being truly present in the Blessed Sacrament. He was affected by the growing debate among certain theologians who, for the first time in the history of the Church, began to have doubts about the body and blood of Christ being actually present in the consecrated bread and wine. In response to his doubt, when he recited the prayer of consecration as he celebrated the Holy Sacrifice of the Mass, blood started seeping from the consecrated host and onto the altar and corporal.

Fr Peter reported this miracle to Pope Urban IV, who was nearby in Orvieto. The pope sent delegates to investigate and ordered that the host and blood-stained corporal be brought to Orvieto. The relics were then placed in the Cathedral of Orvieto, where they remain today.