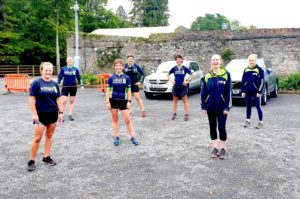 BACK on Sunday 24 May Trilogy Triathlon Club announced their second community fundraiser in a number of weeks, this time for Jamie Mannion from Portlaoise. Jamie is an amazing little boy and will be eight years old next month.
To date his family await his first independent step. To do this Jamie needs intensive therapy consisting of four hours a day for three full weeks in the amazing experienced Napa Centre in America which has the expertise, technology and equipment to support Jamie in the goal of taking his first steps.
The fundraiser was set up by club members Pam Grogan and Sharon Roche with the aim to raise about €3,000. However this target was soon to be over shadowed by the phenomenal response it received from its campaign supporters.
In the first few weeks the challenge was to Tri-it or 5km it for Jamie. This meant you could burpee, bike and run over different distances or you could simply 5km it for Jamie.
The club held a virtual day away in the second weekend of the live fundraiser with several club members all taking on the virtual triathlon distances and donating when they had completed their virtual race. The club’s virtual event organiser Sharon Roche said: “There was a real buzz that weekend as we had the best weather and the club spirit was really high.” 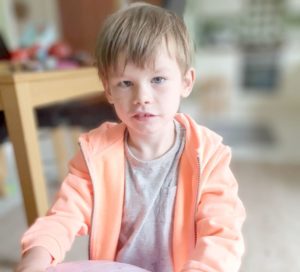 As the fundraiser rolled into its second week, three teachers from Portlaoise Educate Together N.S., where Jamie’s older brother Ryan is a pupil, got in on the action. Teachers Darach Kennedy, Conor Hogan and Paudie Bourke reached out to the school community to sponsor them to do a relay-triathlon. Conor did 50 burpees, Darach cycled 20km and Paudie ran 5km.
PETNS Facebook page had live videos and photos of the event as it happened. The teachers asked the school community to donate to Trilogy’s fundraiser and in doing so raised over €500 in two days.
The donations were slowing down and with just over a week left Pam Grogan came up with an idea to keep the fundraiser alive. She asked six other Trilogy members to take on a challenge she had set herself. The challenge was to run 100km in a week.
Pam said: “I knew it was a big ask but I also knew that the support the club had given so far to the campaign had been beyond expectation’ and she wasn’t disappointed.”
Seven female members, Hilary Costello, Aoife McEvoy, Eimear Mathews, Niamh Kavanagh, Olwyn Larkin, Pam Grogan and Olive Maher, started their 100km on Saturday 6 June. These seven women hit the roads hard every day clocking up the kms for Jamie.
The final leg of the fundraiser drew in big donations with days to go. While Niamh Kavanagh missed the first two days of running due to an injury she soon caught up with running two 20km runs back to back. Pam Grogan finished her run on Friday last while the remaining women all met in Emo Court on Saturday morning to complete their final 10km together.
The seven ladies reunited at the finish line and celebrated their victory for Jamie as in that week alone the ladies pulled in a further €1,200 in donations.
Trilogy’s fundraiser came to a close at the weekend and their final tally was an amazing €7,217 which will go towards the Jamie Wants to Walk campaign.
Pam Grogan said: “The last three weeks have been immense but it’s been worth every minute, every hour, every run as I knew that the more we did as a club the more we would raise for Jamie and bring him closer to taking his first independent step.”