Laois farm remembrance service to be shown on RTÉ 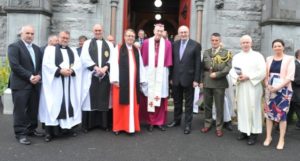 THE Laois-based annual Remembrance Service for people who lost their lives on farms will be broadcast on RTÉ television this year.

Bereaved families from all over the country usually gather in Abbeyleix parish church for the ecumenical service, organised by the Embrace FARM group established by Brian and Norma Rohan from Shanahoe.

Due to Covid-19 restrictions, the 2020 Abbeyleix ceremony will be streamed online instead at 2pm on Sunday 28 June. It will also be shown on RTÉ on Sunday 5 July at 11am, produced by Kairos Productions for Embrace FARM.

Anyone who would like a loved one to be included in the memorial roll call of names at the service can call/WhatsApp on 085 7709966, or email [email protected] with the name, year of death and county. A photo of the person remembered can be included. The service will be live-streamed on www.embracefarm.com.

People are also invited to join in the #WeRememberYou campaign throughout June, to remember a person in their life who was lost or injured in a farm accident. The campaign will culminate with the online Remembrance Service, where names of those affected by a farm accident will be spoken in order to honour their memory.

Last year, 145 loved ones were remembered at the Abbeyleix ceremony. This year will be the seventh annual remembrance service but the first to be hosted online.

Last year’s ceremony especially remembered the tragic death of Abbeyleix parish priest Fr John Cummins, who presided over the service in 2018 and died in a freak car accident in January 2019.

Between 2010 and 2019, farm-related accidents claimed 214 lives in the Republic of Ireland, according to the Health and Safety Authority (HSA). Teagasc research carried out between 2012 and 2017 estimates that there is an average of 2,500 farm accidents every year. Farming remains the country’s most dangerous job.

Brian Rohan says: “Behind each death there is a grieving family who are trying to find meaning and comfort. Behind every farm accident victim is a survivor, whose injury may be impacting themselves and their families’ lives.

“We would encourage anyone who would like their father, mother, husband, wife, child, relative or someone important to their family or community remembered to send us their details, so that we can honour their memory and continue to support each other on our collective journey.”

People can also get involved on social media, simply by recording a remembrance message and sending it to Embrace FARM, or tagging them with the hashtag #WeRememberYou in your message.

Brian’s father, Liam Rohan, passed away in June 2012 following an accident on their family farm. Liam farmed all his life and his family planted a beech tree in his honour on his first anniversary. A beautiful living memorial, the tree is the first thing seen when entering the farm and the last when leaving. The national remembrance service is held each June.

Brian established Embrace FARM as a national support network for people affected by farm accidents and deaths, as at the time there were few if any supports for families in terms of emotional, practical, business, legal and financial advice. The group is a registered charity.