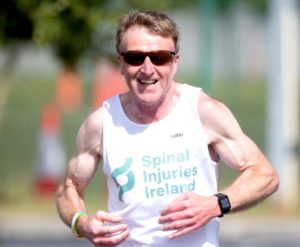 WHEN Aengus Burke set out on the path to do a fundraiser for Spinal Injuries Ireland he readily admits he tought he might raise €500 or €600. So it hardly comes as any great surprise that Aengus was stunned when the event was completed on Sunday he was well on his way to reaching a €3,000 total.
On Sunday morning Aengus combined his two great sporting loves to complete his fundraiser. He ran 21 miles, starting at Rossleighan Park by taking a route that brought him back to Rossleighan approximately every 22 minutes. The U/16 team that Aengus trains played a bit of ball and joined him on a relay basis for the duration of the run.
The other Portlaoise AFC juvenile teams also met on rota basis and joined him on a lap of the pitches each time and all abiding to current guidelines.
Aengus explains: “When Spinal Injures Ireland made contact four weeks ago to run a virtual marathon I thought it was going to be difficult. Running clubs were saturated at time with fundraisers.”
As well as being a committed runner, Aengus coaches young players in Portlaoise AFC. This was to play a major part in his fundraising exploits. 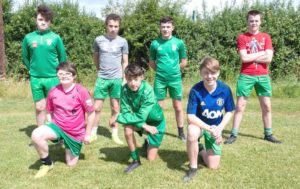 Members of Portlaoise AFC U/14 team

“I put it to the parents of my U/16 team to see if we could do anything in the current situation to raise some few euro. I got a very positive response to the idea which I had forwarded to the club for approval allowing for the Covid restrictions.
“The club then suggested we go further and get more of the juvenile teams involved. Sylvia Gee then rang and suggested that I contact Ricky McCausland who would help me promote the event. Hence the cringing video, which after 999 attempts by myself was made somewhat presentable under Ann and David’s production.”
This proved to be a masterstroke by Ricky, with the event growing legs from the promotional video resulting in a wonderful event on Sunday.
To add to the occasion Aengus contacted an old friend, hand cyclist Paul Tobin from Mountrath to see would he do a few kilometres with him.
“I should have known better,” said Aengus. “He came and did the complete event. I can honestly say it made a massive difference with time just flying by.
“Thanks also to Ger Conroy for joining in on a loop and Ursula O’Malley, Lucy Dunne, Ashling Bohan and Joe Walsh from Portlaoise AC for joining in also.”
It came as a very pleasant surprise when out of the blue the Raheen Cyclists arrived to join in for a loop.

The Raheen Riders showed up to give their support at Rossleighan Park Photos: Denis Byrne

“This was organised by two brilliant people, Anne McEvoy and Paul McEvoy,” said Aengus.
He had a special word of thanks for Portlaoise AFC club members Cliff Ó Meachair, Mick Coleman, Chris Nestor, Pat Horan, Grainne Kelly and Sylvia Gee for their work and support prior to the event and on the day.
“I also want to thanks Denis Croke and Denis Byrne and the Laois Nationalist, great supporters of ours over the years, for covering the event,” added Aengus.
He went on|: “Genuine thanks to everyone who made donations, people that I might only meet occasionally kindly contributing along with those I meet regularly. I was able to thank on line at the start but that option is gone from link for some reason. “Thanks to all who shared and promoted the event, special mention to Jimmy Hewitt for his kind words.
“Lastly thanks to the coaches who got their teams out today and participated. We sometimes lazily criticise young people, but it was marvellous to see the ladies and lads getting out of their beds on a Sunday morning to play ball and join in running the loops of Rossleighan and doing a bit for charity.
“I am delighted to say that between online and card donations we are not far off an incredible €3,000. A link is attached if anyone wants to get us over the line. This was Portlaoise AFC at its best in the community.
If you wish to contribute to Aengus and Spinal Injuries Ireland following this link – https://give.everydayhero.com/ie/portlaoise-afc-aengus-burke 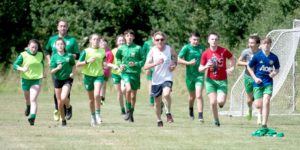 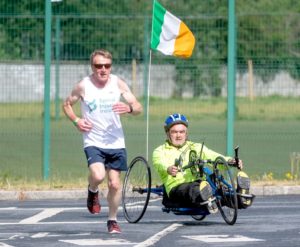