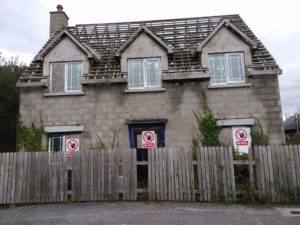 One of the derelict houses with rotting roof timbers at Bruach na hAbhainn estate in Killeen, which the county council has offered to purchase subject to full assessment

LAOIS County Council has made an offer to buy five derelict properties in Killeen village for use as social housing.

The vacant properties at Bruach na hAbhainn, which ruin an otherwise well-kept estate, have been an eyesore for years.

The five vacant properties include two derelict houses that have been vandalised. One house with rotting roof timbers and no windows is a particularly serious eyesore, as it is located at the front of the estate.

Now the county council has “carried out an initial assessment and has made an offer to purchase”, according to senior planning officer Angela McEvoy. The offer is subject to a full assessment, including the interior of the properties, before they can be purchased and refurbished for people on the council’s housing waiting list.

Ms McEvoy said: “The council is keen to return the properties at Nos. 20, 21, 39, 40 and 41 in Bruach na hAbhainn to use for housing purposes as soon as possible. The property owners are in the process of retrieving title deeds and will revert with a response to the council’s offer in due course.”

The update was given in response to a query from Cllr Aidan Mullins, at the latest meeting of

Cllr Mullins said he was delighted to hear there was “great progress” at last in the long-running saga, which was “a complicated situation” as AIB had possession of the properties and “would not engage” with the council for some time. He complimented the council’s vacant homes officer, Gerry Ryan, for his work on the difficult project.

The news was also welcomed by Cllr Pádraig Fleming, who has repeatedly raised the issue at council meetings. Cllr Aisling Moran, who lives in Killeen, said she was happy that progress was being made but stressed that a time limit should be imposed, both in the case of Bruach na hAbhainn and other derelict houses around the county.

Cllr Moran said: “There should be a limit put on the amount of time owners have to comply with derelict property legislation. It is reducing the value of other people’s houses in that estate. The council should come in and take over after a certain time in all these cases.”

The problem of vacant houses in Bruach na hAbhainn has been highlighted repeatedly at council meetings. Last October, Cllr Moran said one of the houses, which had rotting roof timbers, was used for drink and drugs parties and other anti-social behaviour.

At the October monthly meeting of Graiguecullen-Portarlington Municipal District, she and other councillors complained that frustrated neighbours had waited years for a large, two-storey eyesore at the front of the estate to be tackled under derelict sites legislation. The council agreed to forward the issue to the vacant homes officer.