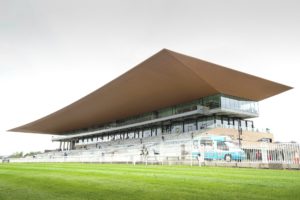 THE Dubai Duty Free Irish Derby is just around the corner and with racing taking place behind closed doors, it’s time to start planning your Derby Day party at home.

The Curragh wants everyone to join with them to celebrate the running of Ireland’s greatest race next Saturday by organising their own Derby Day party at home.  Light up the Barbecue, crack open the champagne and dress to impress in the comfort of your own home.

Race will be shown live on RTE as the highlight of a two hour programme from 6pm to 8pm, while Racing TV will show all races live over the three days. RTE will also televise the features TRM Summer Fillies Handicap and extra.ie Apprentice Derby on Friday and four races on Sunday including the Alwasmiyah Pretty Polly Stakes, Weatherbys Ireland Greenlands Stakes, Paddy Power Rockingham Handicap and Finlay Volvo Race

Following the very positive feedback last weekend, The Curragh will publish their own Digital racecard on all three days which is designed and produced by Weatherbys.

Keep an eye out for details on all the Curragh’s social media platforms for details of all the Dubai Duty Free Irish Derby activities and throughout Derby Weekend for all the latest news.  We will be sharing Derby party recipes and delicious culinary creations that you can make at home, children’s colouring pack, interviews with famous faces, running a brilliant competition where you can win hospitality for you and 10 guests to the Curragh for Longines Irish Champions Weekend in September and membership for 2021.

The O’Brien family will have a very strong challenge in this years Dubai Duty Free Irish Derby with Aidan likely to have multiple runners as he tries to win the race for the 14th time,  while son Joseph who landed the race with Latrobe in 2018 expecting to be represented by Crossfirehurricane, recent winner of the Coolmore Ten Sovereigns Gallinule Stakes and owned by US based businessman Scott Heider

The Curragh has been very grateful for the support of sponsors during these challenging times.   Dubai Duty Free will continue to sponsor the Irish Derby having first added their name to Ireland’s premier race in 2008.    Other sponsors include Paddy Power, DMG Media, GAIN Equine Nutrition, Comer Group International, Irish Stallion Farms and Barronstown Stud, while County Kildare based businesses including Finlay Volvo, Hanlon Concrete, TRM and Weatherbys Ireland will all continue to be part of the biggest weekend of racing in the Irish racing calendar

The Curragh were also delighted last week to announce that Al Wasmiyah Stud have agreed to sponsor the Pretty Polly Stakes from the next three years. The Group 1 contest takes place as the feature race on Sunday 28 June and will be titled the Alwasmiyah Pretty Polly Stakes.

The Stud is owned by Hamad Bin Ali Al Attiya and his family. It is managed by his sons Ali and Mohammed along with Director Olven Esmaeel. The stud is one of the leading owners and breeders based in Qatar with breeding and racing interests in England, Ireland, and France. They already have close links with Ireland having horses trained by Joseph O’Brien and they also have a number of mares in Ireland which reside at Kiltinan Castle Stud in County Tipperary.

” It is our pleasure to sponsor the Pretty Polly Stakes at the Curragh and we look forward to establishing a long-lasting partnership between the Curragh and our stud. The sport has been a passion of ours for many years, from showjumping at an early age to involvement with racing/breeding across Europe and the Middle East. We aim to expand our passion with the main goal of breeding and owning classic winners around the world. We are, therefore proud to sponsor such an important race in a country renowned for its racing history and whilst there will be no crowds this year we will nonetheless with the help of the Curragh attempt to provide a great event for viewers, owners, trainers, jockeys, grooms, and everyone else involved with the races. We would also like to thank Pat Keogh and Evan Arkwright for all their great work and Pierce Dargan for helping start our partnership with the Curragh. ”

The Pretty Polly Stakes, first run in 1948, is named to honour the legendary race horse who won 22 races during her career including the Fillies Triple Crown in 1904. She is buried at Eyrefield Lodge Stud close to The Curragh.

Previous winners of the race have featured many of Europe’s top race mares including Minding, Misty for Me, Alexander Goldrun, Alborada, Flame of Tara and Dance Design, while multiple Group one winner Iridessa landed the race in 2019.

“It is a huge honour for the Curragh that the Al Attiya family have agreed to sponsor one of our most prestigious races and we look forward to working closely with them to develop the partnership over the next three years. Although the race will be run behind closed doors, it will receive extensive worldwide media coverage including live coverage by RTE, ITV4 and Racing TV”