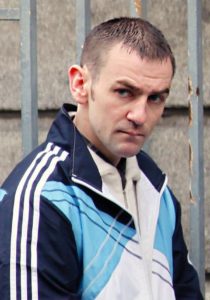 Jeffrey Morrow sentenced to six months in prison when he appeared at Portlaoise District Court yesterday.

A MAN with 121 previous convictions and currently serving an 11 year sentence for his involvement in a gangland murder was given a six month consecutive sentence when he was convicted at Portlaoise District Court for possessing €2,310 worth of heroin while he was in the Midland Prison in Portlaoise.

Jeffrey Morrow (38) with an address at Hazelcroft, Finglas, Dublin 11 pleaded guilty to possessing drugs for sale or supply and for possessing a mobile phone in the Midland Prison on 16 October.

Garda Sergeant JJ Kirby told the court that when the defendant’s cell was searched that €2,310 worth of heroin was found as well as a mobile phone.

He said that Mr Morrow had 121 previous convictions. These included possession of a firearm, threatening to kill or cause serious injury and conspiracy to rob a cash-in-transit van of €1million. He said that the defendant was sentenced at the Central Criminal Courts to 11 years imprisonment in July last year for his part in gangland activity.

Counsel for Mr Morrow Susan Dooner said that her client was hoping to return to Britain when he completes his present sentence in June 2026. She said that “there was nothing sinister with the phone and he hadn’t been involved in drugs before going into prison.”

Judge Staines said: “I come across people who are threatened if they don’t bring drugs into prison. They and their families are threatened and it causes havoc in prisons.”

She went on to impose the six month consecutive sentence in regards to the drug offence, took the other matter into consideration and fixed recognizance in the event of an appeal.

The death has occurred of Breda McGrath- Errill