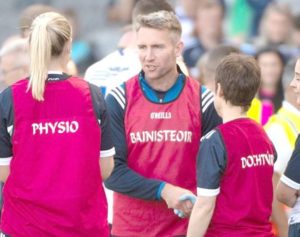 The draw for the Leinster Hurling championship was made this evening. However, due to the Covid 19 pandemic the format for the championship has been changed.

Tonight’s draw, which was covered on RTE 1’s News at Six, took place in the Leinster Council offices in Portlaoise.

In Leinster, Kilkenny and Wexford (last year’s finalists) went straight into the semi-finals. That left Dublin, Laois and Galway, two of which would play a quarter-final and the remaining team advancing to the semi-finals.

In the end Laois were been drawn to face Dublin. Some would see this a preferable to drawing Galway. Of course last year Laois defeated Dublin to advance to an All-Ireland quarter-final meeting with Tipperary.

And if Laois win, they will face Kilkenny in the semi final.

If Laois are beaten, Eddie Brennan’s men will go into a qualifier game with the other beaten teams from Munster.

The draw for the Leinster football championship semi-finals were also made.

In the original draw Laois were drawn to meet the winner Longford or Louth in the quarter-finals.

If Laois get over this hurdle the face either Dublin or Westmeath in the semi-final.