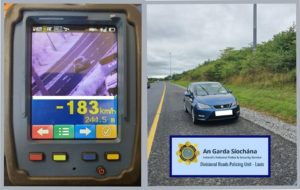 The car that was seized from a learner driver, who did 183kph in Laois this evening

A LEARNER driver was arrested in Laois this evening, after roaring along the motorway at a whopping 183kph.

The Laois Roads Policing Unit was operating a radar speed checkpoint on the M7, when the culprit zoomed past doing a full 63kph above the speed limit.

After gardaí pursued the car and pulled it in, it transpired that the unaccompanied driver was on a Learner Permit.

The vehicle was seized under the Clancy amendment, which allows cars driven by unaccompanied learner drivers to be seized at the scene.

The driver was arrested and charged with a variety of offences, including dangerous driving.