New Minister thanks the Laois electorate 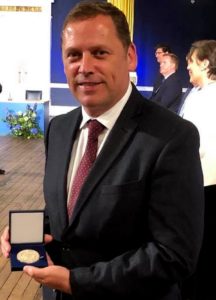 The new Minister for Agriculture and Marine Barry Cowen thanked the electorate in Laois in a message following his appointment.

A brother of former Taoiseach Brian Cowen he has been spokesman in a number of portfolios since his election to the Dáil in 2011. As well as spokesman on public expenditure and reform he also held the position of spokesman on environment and local government and on social protection.

A married father of four, he was first elected to Offaly County Council in 1999, where he served until his election to the Dáil to the seat vacated by his brother.

A member of the Cowen family has represented Offaly in the Dáil continuously since 1977. His father Bernard Cowen was elected in 1969 but lost his seat in 1973. He regained it in 1977 and held it until his death in 1984.

In his message to the people in the Laois/Offaly constituency Minister Cowen said: “Belated thanks and appreciation for all the well wishes and words of encouragement and support on my appointment to Cabinet.
My emotions ranged between privileged, excited, delighted, nervous, worried and proud.

“I am so grateful to the electorate of Laois/Offaly who afforded me the opportunity to be considered for such preferment.

“Also my wife Mary, my immediate and extended family,who although not in the limelight sacrifice much too.”

The 57-year old newly appointed Minister said: “To follow in the footsteps of my father and brother is a source of immense pride and I’m also humbled by genuine warmth of loyal and faithful Offaly people irrespective of their politics.
I look forward to working hard and tirelessly to realise the ambition contained in the Programme For Government document that I helped produce.”