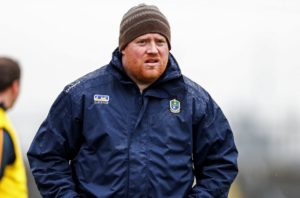 Ciaran Comerford who has stepped down as  Roscommon hurling manager  Photo: INPHO/Laszlo Geczo

Former Laois and Borris/Kilcotton star Ciarán Comerford has stepped down from his position as the Roscommon senior hurling team manager.

Ciarán was in his final year at the helm of the team, but rather than complete the season when intercounty training resumes in September, he has brought the decision forward to facilitate a smooth transition into next year.

“Ciarán has been a very popular manager here in Roscommon since his appointment back in November 2017,” it said.

Speaking after the announcement Roscommon Hurling Board Chairman Christy McDermott said: “I’d like to thank Ciarán for his efforts over the past two and half years with the Roscommon team. I fully respect the decision he has made, as the Christy Ring Competition will not now commence until much later in the year. Ciarán feels this is a more appropriate time to step down as it allows a new manager to prepare for the Christy Ring Cup and the new season which will follow on so closely. We had some good days including our winning of the Division 3 A National League last year. For those, we thank you Ciarán.”

Comerford started his coaching career with Borris/Kilcotton underage teams and this led to a stint working alongside Seamus ‘Cheddar’ Plunkett at U/21 level with Laois. He subsequently moved to Portumna and played with the club before training the decorated outfit at senior level alongside his duties with Roscommon.

Comerford hurled with Borris/Kilcotton up until 2014 before work took him to Portumna. Earlier this year it was reported that last year’s beaten finalists had appointed their former player as manager for 2020 following the departure of Eoin Brislane from Toomevara.