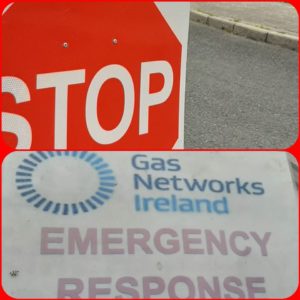 A LEAKING gas mains in the Kilminchy area of Portlaoise has been resolved and the area has been declared safe by the fire service.

The ruptured mains was clamped shortly after 3pm today and emergency services have left the scene.

A unit from Portlaoise Fire Station rushed to a housing estate in Kilminchy at lunchtime, after receiving reports that a gas mains was ruptured.

It is understood that the gas mains was inadvertently struck and damaged during work on an adjacent building site. Worried residents reported a strong smell of gas and a loud hissing noise in the estate.

Emergency services sealed off the site and a small number of houses were evacuated as a precaution, as  the fire service dealt with the leak. A technician from Heat Services Ltd was called to the scene to clamp the mains.

Traffic was diverted and people were asked to avoid the area while the repair operation was underway. The emergency was dealt with quickly and the fire service has reassured residents that the area is safe.