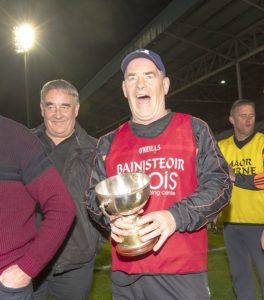 THE death of Tom Delaney on the longest day of the year sent shockwaves over a wide area. Tom was known and respected far and wide and in a far too short life he achieved more than many would ever dream of.

Tom was one of four sons born to Tom and Bride of Derrycon, Mountrath. Derrycon is located on the side of the Slieve Bloom Mountains and Tom grew up surrounded by fauna, flowers and trees in what is truly lovely countryside.

School was not too far away in Paddock or Briscollo on the Ballyfin side. Because families were moving away from the area the Department of Education tried to close down these two teacher country houses of education and while the latter closed, Paddock put up a fight and won.

Tom would have been inspired with the way the people fought for their rights at the time and it stood to him for the rest of his life in business and sport.

Tom lived in the parish of Castletown and after school took on various positions with local farmers. But he did not feel farming was for him and he soon was called to the bar. A new hotel was built in Borris-in-Ossory by man named Jack Cleary and Tom was soon serving hundreds of customers and proved to be very successful.

Like many hostelries in small towns and villages the Leix County closed its doors after many years but Tom was not put off by that. In later years when the Pheasant Bar in Mountrath came on the market Tom went for it but knowing it could be difficult. However, times improved and soon the new man became very popular right in the middle of ‘Town’.

Being the family man that he was Tom decided to name the bar and lounge Tom Delaney and Sons. Only last year he considered calling time, not because the business was going slow indeed quite the opposite, but the attempt to persuade some of his family to take over fell on deaf ears.

Like their father, any of his three sons were quiet capable of running the show but it simply did not appeal to any of them. Instead he decided to change the decor and painted the entire building in beautiful and in so doing made a good pub look great.

Tom had a deep involvement in sport and being away many evenings at training and matches meant others had to step in. That caused its own problems but his wife and best friend, Anne, was very understanding and he was always around when most needed.

Eight years ago he was prevailed upon to coach the Castletown/Slieve Bloom junior football team and they entered the ‘C’ championship. As it panned out they reached the final with some impressive displays but who came through on the other side only neighbours Camross.

The final was scheduled for Shanahoe and on a wet evening in August the two produced a great sporting encounter. The two evenly matched teams were neck and neck when Ben Conroy fired a powerful ball into the roof of the net to give the Blooms a first football title.

Tom was thrilled but knew his neighbours would be disappointed. There were no hard feelings, hurling would be the first love of both these but they liked the big ball too. There was a bonus for Tom as his son Tom wore the number six jersey.

A year later they took a step up and found Junior ‘B’ more difficult but reached the semi-final taking on Killeshin. In a thrilling contest and it was Orange and Green and the experienced Killeshin side led for most of the game but on the run it the hurling club prevailed by a narrow margin and now the parish were in another final.

Emo and Clonaslee/St Manman’s fought out the other semi-final and Tom went to have a look in at the opposition. In a hard fought encounter Emo prevailed.

On 24 August the sides squared up in O’Moore Park before a big attendance. For a long time it was looking like the more experienced Emo would at last bring home the trophy presented by the club many years previous to perpetuate the memory of the great Chris Lawlor. However, Tom had the lads well prepared and in a blistering finish the title was headed to the Slieve Blooms again. Tom Delaney had master minded another great success for the underdog.

Ben was team captain, man of the match and later voted player of the year, the first player to win a football award for the parish. 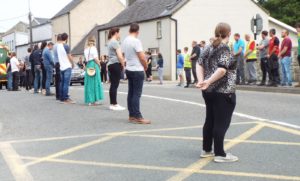 There would be another chapter when they qualified for the Under-21 ‘B’ football decider and defeated Clonaslee/St Manman’s, another impressive chapter completing a unique treble having earlier surprised Abbeyleix to lift the Jackie Daly Cup in Junior ‘B’ hurling.

Tom’s stamp was all over the three titles.

Tom took a step back for a while but not for too long. Two years ago, when the two ends of the parish went their separate ways, Tom was asked to manage Slieve Bloom in football. However, but hurling was enjoying a resurgence in the club having swept all before them at junior level in two 2016 to earn the right to compete at intermediate level.

Tom suggested an outside voice for hurling and he would look after football. Ger Manley of Cork answered the call to manage the hurlers and they were rejuvenated reaching the final without a hiccup.

Who would provide the opposition but their next door neighbours Camross. Tom made sure to keep his head down, he knew there could be conflict. He was busy keeping the footballers injury free and they reached another ‘C’ final even with several newcomers.

Many times losing finalists Colt were once again knocking on the door. Ten minutes from the end and the sides were all square and Colt looked like ending their famine but Tom had different plans. He sprung another Delaney, James. His two sons Darragh and Tom had played well. Five minutes remained when that man ‘Big Ben’, well contained until now, came to the rescue. With a swift move down field he grabbed his side’s only goal and Tom had completed a magnificent football campaign.

These lads worked hard for him and got their reward. What had begun in Shanahoe on a wet August night was completed in O’Moore Park on a lovely September evening six years later.

Meanwhile there was the matter of the hurling final. Rivalry was great but being in business Tom would wish both sides well. Even with family involved he remained tight lipped on the lead up and because he had huge respect for the Camross manager at the time, fellow business man Phil Duggan, Tom hoped all would end well and it did.

A magnificent sporting contest ensued between the neighbours and another great chapter was written in the history of Slieve Bloom GAA club. They had captured the Hetherington Cup that commemorated the memory of local Mountrath man Willie Hetherington who was killed in the Congo 60 years ago this year.

Ben Conroy was captain and now the Blooms would be playing senior hurling. Tom, while not accepting the credit, it was his imprint that shone through the great years of their many successes.

Tom seldom missed a game in O’Moore Park in either code but his football brain and common sense approach is what he will be remembered for.

On Sunday 21 June Tom had visited the training grounds to make plans for whatever was to happen after lockdown. He was looking forward to whatever it was after a break and having had his business in lockdown as well he needed to get out.

That evening as was his routine in recent weeks he took a walk across the Slieve Blooms to inhale the fresh air and smell the wild flowers in full bloom and the heather in all its glory. Suddenly he took ill and before he could be reached Tom had passed away not far from where he was born in the mid-‘60s.

Tom would have been looking forward to the re-opening of his business and meeting many friends and the friendly greeting as he made his way to a seat in O’Moore Park. But that was not to be. The only opening now will be he when he knocks on Heavens door and he can be assured of a great reception.

On Thursday last Mountrath stood still as the funeral cortege made its way from Glenbower to St Edmund’s Church in Castletown. Slieve Bloom GAA flanked the cortege right through to Castletown as many more mourners stood on either side of the main road.

Hundreds stood in silence along Main Street after the hearse drove slowly passed the old cattle mart before turning right and halted for a few brief moments outside Tom’s pub to an eerie silence.

The high esteem Tom was held in was evident with so many publicans from all over the county standing man to man and woman to woman. Along with the business people of Mountrath they realised a void had been created with the passing of Tom Delaney.

Fr Willie Hennessey celebrated Requiem Mass with Covid 19 restrictions but the homily was streamed on Castletown Facebook page. After Mass the cortege went back to St Fintan’s Cemetery, Mountrath where Tom was interred.

Tom is mourned by his wife and best friend Anne, and three sons Thomas, Padraig and Darragh, his brothers Paddy, Michael, Denis, his parents in law Pat and Mary, sisters-in-law, brothers-in-law, nieces, nephews, uncle Phil (Quinlan), cousins, work family and many, many sporting and business acquaintances and friends.