Tom Cox: Eye on the Past 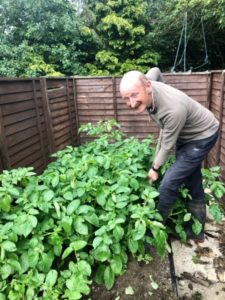 LAST week, I had a brief dalliance with fame, as our eldest daughter made a video clip of the first stalk of our crop of potatoes being dug by yours truly (Monty Don must be shaking in his boots).

To be fair, there was an irrational amount of excitement surrounding this event, probably caused by the regular virtual visits of our two-year-old Scottish grandson, whose Facetime chats invariably include a visit to granda’s garden. In the interest of balance, he also asks to see nana’s kettle and her other kettle (the one on the range) and her iron – the latter being mostly employed these days in the production of face masks, at which nana has become a dab hand.

Following the exhumation of the aforementioned potatoes, the video clip winged its way to Edinburgh where, we understand, granda’s digging skills garnered critical acclaim from the two-year-old.

I should explain, before your imagination runs away with you, that the potato crop is a modest one. I know, with modern farming methods, today’s farmer could track individual seeds from planting to harvest. Well, so can I. At the beginning of April, I managed to buy the last three packets of ‘first early’ seed potatoes from the garden centre and there were five seed potatoes in each packet. By my calculations, we have 14 stalks of potatoes yet to be harvested. Based on a yield of half-a-kilo from the first stalk, unlike Monty Don, I don’t think the supermarket chains will be quaking in their boots.

Read Tom’s column Eye on the Past, in full in next Tuesday’s Laois Nationalist

Filed under: The Humble Spud