Old rivals face up in opening game of 2020 championship 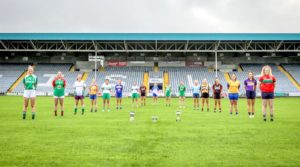 The captains of the ladies teams that will contest the senior, intermediate and junior championships at the recent launch in MV Hire O’Moore Park Photo: Paul Dargan

THE rivalry between Sarsfields and Timahoe is not just one of the most renowned in Laois ladies football, but indeed that of any sport within the county.

Timahoe ruled the roost from the mid-’90 to the late noughties winning 12 titles in 19 years. Sarsfields may not have won their first title until 2008 but were knocking on the door for a number of years having contested four finals in the six years before claiming their first.

But once the Mountmellick outfit got a taste of success they were not prepared to let it go and have dominated the ladies game in Laois for the past decade. Between 2008 and this year Sarsfields have won the senior title on 10 occasions and are going for the eight successive title this year.

Prior to Sarsfields emergence as a football power the teams to be reckoned with were Timahoe, Crettyard and Shanahoe. The fortunes of all three fluctuated but while Timahoe have continued to battle their cause at senior level, Crettyard and Shanahoe have faded badly, so much so that Crettyard do not even field a team in this year’s championships while Shanahoe ply their wares at intermediate level.

Last September the two again faced up to each other in the county final. Timahoe so badly wanted to regain what they consider as their rightful place at the top of the ladder, but it was not to be.

Once again their Mountmellick based nemesis emerged victorious to capture their seventh successive county senior title.

In fairness to the Timahoe girls, who were looking for their first title in seven years, the scoreline (4-13 to 1-10) did not do them justice. They put it up to Sarsfields in the opening half and actually led, albeit by a point, at half time.

But in the second half it was Sarsfields’ experience that got them over the line.

Now, 10 month’s later, that old rivalry will spark off another great contest in the opening round of this year’s championship.

Given that no one has kicked a ball in anger since last year it is very hard to predict what way this, or either of the other two first games, will go.

Who will the long break have favoured most?

Will it be Sarsfields who will be fresh and rearing to go? In other year many of their players would have been involved with county teams, and possibly feeling the strain, no that they every displayed adverse symptoms. That will not be the case this year.

Timahoe, while light on the training side of things themselves, might see this as an opportunity to pin back a Sarsfields side which might not be at its sharpest after the long lay off.

One way or anther this should be an intriguing contest.

This of course is not the only game of interest to be played on Sunday.

Portlaoise is a club that has been making a name for itself, so much so that they contested the three finals prior to last year but were to lose out to Sarsfields in all three.

But they are a side that has been maturing nicely all along and should provided St Conleth’s with a severe test in their opening game. The Killenard based outfit have been one of the kingpins in recent years and but for the superiority displayed by Sarsfields would no doubt have garnered a few county titles.

On the face of it the Saints should get their campaign off to a winning start.

And talking of Saints, it is two saints sides who will contest the third game of the opening round, St Paul’s and St Brigid’s.

St Paul’s find themselves mixing it with the big guns after defeating Ballyroan to claim back-to-back championships after capturing the intermediate crown with the defeat of Ballyroan in what was an enthralling contest. That triumph followed on from their junior success 12 months previous.

This will be an absorbing contest that could see the result go either way.

The intermediate championship also get up and running this weekend with two games being played on Saturday – Clonaslee/St Manman’s v St Joseph’s, Ballyroan v Park/Ratheniska while Shanahoe have a bye.