Goals galore in opening round of Ladies SFC 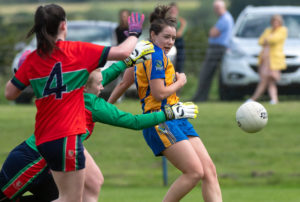 Mags McEvoy makes no mistake and places this ball into the net in their Senior Football Championship opening round clash with Timahoe Photo: Denis Byrne

THERE were goals galore in the opening round of this year’s Laois LGFA senior championship on Sunday.

The three games amassed an amazing 15 goals with eight of them being scored by reigning champions Sarsfields in their demolition of Timahoe.

Sarsfields were in top form as they began the quest for their eighth county championship in a row against Timahoe. Apart from the first five minutes, Sarsfields showed their class all over the park in what was a repeat of last year’s county final.

Timahoe got off to the brightest start as they fired over three quick fire points. Sarsfields replied in the best way possible as Claire Conlon burst through the Timahoe defence to fire into the back of the net.

Portlaoise got off to the best possible start in this year’s championship as second-half goals proved the difference between them and St Conleth’s.

The sides were tied together at the break on 1-5 apiece but Portlaoise really took the initiative in the second-half as they landed a succession of scores to put them in full control.

In this game Leah Loughman was top scorer with 2-2.

The third game saw the St Brigid’s win the battle of the saints, their two goals being the difference against St Paul’s.

St Paul’s came into the championship off the back of double promotions in the last two year’s but battle as they did they just could not match Brigid’s on the day.

The winner’s goals came from Anna Moore and Niamh Power but there were point scoring exploits from Patrice Whelan (6) and St Paul’s Emma Lawlor (7).

For full reports see tomorrow’s edition of the Laois Nationalist.