Stradbally share the spoils on their return to action 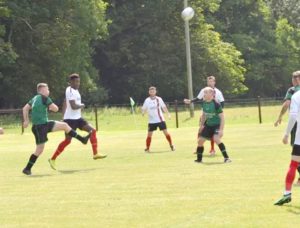 The small crowd in attendance were treated to a cracker of a game. From the very start both these teams showed no ill effects from the Coronavirus forced break and played out a very entertaining game

In an end to end encounter, from the start it was clear why both these teams are in contention at the top of the Division 1 table.

Mullingar started the game brightly and dominated in the early stages. Their dominance paid dividends in the 16th minute as they got the first goal of the game slotting passed Stradbally goalkeeper Derek Beale from a low cross.

Stradbally didn’t panic after their poor start. Alex Conway, Jody Dillon and Tim Flood started to influence the game for Stradbally and they all went close to scoring before the break but Mullingar went in at half time in the lead.

Stradbally came out of the blocks in the second half in impressive fashion, knowing that defeat would seriously dent their title charge.

They took control of the middle of the park and started to create chances at will, with Conway once again going close before Benny Lawlor was denied by Mullingar’s keeper.

Then came the turning point of the game when Mullingar were reduced to ten men as their central midfielder was giving his marching orders after collecting a second yellow card.

Stradbally smelt blood after the sending off and pushed for the equaliser. Their dominance finally paid off with 15 minutes to go when substitute Tom Shiel fired home from 20 yards out into Mullingar’s net.

The opportunity for full points was now there for Stradbally, who had a late on penalty shout waved away by the referee.

Stradbally were all out in attack at this stage and they were caught on the break as Mullingar thought they scored the winner in injury time but were denied by the offside flag.

In the end both teams had to settle for a share of the spoils in what was a terrific game with both teams leaving everything on the pitch.