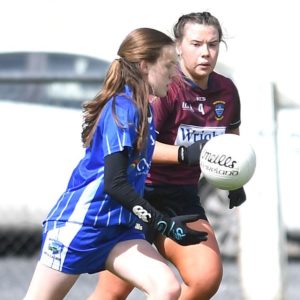 PORTLAOISE got off to the best possible start in this year’s senior championship as second half goals proved the difference between them and St Conleth’s. The game was played in typical July conditions with the ladies basking in the sun for the whole game.

Portlaoise were quick out of the blocks as they held an early three point lead after ten minutes. Leah Loughman got the game’s first score with Aisling Kehoe following suit soon after.

Portlaoise were sublime at working the ball up the pitch and this was evident as Ciara Byrne’s terrific run set up Kehoe to get Portlaoise’s third point. Loughman pointed her second of the game soon after as great work from Kirsten Keenan was rewarded with a point.

Conleth’s eventually got off the mark in the 13th minute as Shifra Havill raised a white flag for the home side.

However, Portlaoise’s Loughman was in inspired form in corner forward as she scored her first of two goals with a fine finish beyond Rachel Gorman in the Conleth’s net. Shaunagh Jackson opened her account from a free to give Portlaoise complete control early on.

A St Conleth’s goal would be the start of resurgence from the Killenard as they rattled off five scores before half-time. Maira Byrne converted two frees with Sinead Cullen pointing from play.

Laura Dunne took her goal opportunity when it came as she fired the ball into the Portlaoise net. Claire Fox got the first half’s final score as she raised a white flag leaving the game’s outcome in the balance with the sides going in level at 1-5 each at the break.

Portlaoise really took the initiative in the second-half as they converted a succession of scoring opportunities to put them in full control. Substitute Grainne Moran slotted over two frees before Kehoe got her side’s second goal with a superb finish into the bottom corner.

Aoife Kirrane kept her side ticking over with a free before Portlaoise pushed on yet again.

Jackson got Portlaoise’s fourth goal with a rasping shot that flew into the top corner. The hard-working Fiona Dooley then scored a point of her own as the game fizzled out.

The game ended with a Moran free being matched by two scores from Kirrane as Portlaoise ran out 12 point winners.

Portlaoise’s defending was immense throughout the game with their six backs having superb games as well as Aoife Hyland Conlon in the Portlaoise goal.

Portlaoise face a stiff test next time around as they face off against county champions Sarsfields whereas Conleth’s face a tough test away from home against St Brigid’s. Both these games are scheduled for Wednesday 29 July