Sarsfields shoot out the lights as they breeze past Timahoe 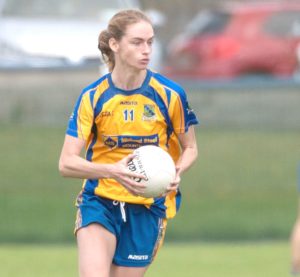 SARSFIELDS scored a remarkable eight goals as they began the quest for their eighth county championship in a row against Timahoe on Sunday afternoon. Apart from the first five minutes, Sarsfields showed their class all over the park in what was a repeat of last year’s county final.

It was Timahoe who got off to the brightest start as they fired over three quick fire points. Mo Nerney converted a free as well as scoring a point from play with Jenny Murphy also splitting the posts after winning a Sarsfields kick out.

Sarsfields replied in the best way possible when Claire Conlon burst through the Timahoe defence to fire into the back of the net.

Nerney scored her third point shortly after as it looked as if Timahoe were going to give Sarsfields a run for their money.

Joyce Dunne finished a great team move which resulted in her first of four goals. Conlon took her tally to 1-1 with a point from play.

Nerney pointed yet again for Timahoe as she always looked dangerous in and around the goal area.

Joyce Dunne would soon get her second goal of the game as the Timahoe defence struggled to get to grips with the Sarsfields’ attackers.

Conlon pointed a free to increase her tally for the game. Midfielder Leah Tarpey fired over two points in succession as Sarsfields looked in total control just before the half time break.

But Mags McEvoy got Sarsfields’ fourth goal of the game just before the break with the game’s outcome now well beyond doubt.

Conlon started the second half with an array of points, with two frees and one from play.

Nerney pointed again, however this would be Timahoe’s last score of the game as Sarsfields’ experience and class took over.

O’Sullivan got her second point of the game with Grainne Lawlor opening her account with a score from play. Mags McEvoy raised her second green flag before Laura Marie Maher hit a purple patch to score four points from play one. Tarpey also added to her tally as Sarsfields cruised through the second half.

Joyce Dunne would take her goal tally to four as she blasted in another three goals for the defending champions. Laura Marie Maher scored her fifth point before the scoring was finally ended by Lorna O’Sullivan as she scored Sarsfields eighth goal of the game.

All in all, it looks as if Sarsfields will take some stopping if they are not to be crowned county champions for a record eighth time.

For Timahoe, they’ll be hoping for a big response next time out against St Conleth’s. Sarsfields play Portlaoise away in the next round of fixtures. These games are down to be played on Wednesday 29 July.