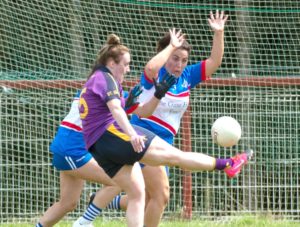 Both teams settled very quickly as they traded many scores early on.

Patrice Whelan got the game’s first score with Aoibhinn Maher replying with a point for the home side. Emma Lawlor and Aoife Gallagher exchanged points before points from Caoimhe Simms and Niamh Phelan gave St Brigid’s the early lead.

Sinead O’Rourke saved well from Aine Lacey as St Brigid’s pushed for that early goal. Lawlor converted a free for St Paul’s before the visitors got that goal that they had been looking for.

An effort from Patrice Whelan was saved by Sinead O’Rourke, however Anna Moore was on hand to smash the rebound into an empty net for her side. The goal gave St Brigid’s some confidence as they fired over three quick fire points, the full forwards all chipping in with points.

Patrice Whelan then converted a free with Saoirse Byrne and Aoife Gallagher both also splitting the posts.

St Paul’s responded with two frees from Emma Lawlor and these were to be the final scores of the first half as it was St Brigid’s who held a six-point advantage at the interval.

Lawlor started the second half just as she had ended the first, as she pointed to leave the gap at five points.

However, St Brigid’s would soon put the game to bed as three points from Patrice Whelan (two frees) and a superb goal from substitute Niamh Power put the game beyond St Paul’s reach.

The game ended with two points from St Paul’s as Aoife Langford pointed from play along with a free from the ever impressive Emma Lawlor but there was no stopping St Brigid’s who ran out nine points winners in the end.

St Brigid’s forwards were impressive throughout with four of the six towards getting on the score sheet. Their strong attacking presence was matched with a superb defensive display from them when only conceding five points from play.

For St. Paul’s, it’s all about how they react after their first game back at the senior grade. They’ll be looking to get that win next time around now that they know the strength of the senior grade.

In terms of the next round of fixtures, St Paul’s play away to Timahoe whilst St Brigid’s take on St Conleth’s at home. These fixtures are down to be played on Wednesday 29 July.

Friends of Ger appeal for your support