This championship is all to play for 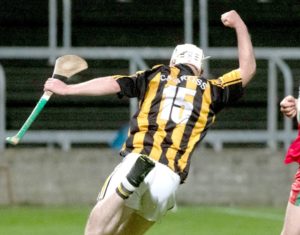 Who will be celebrating this year just as Camross’ Oisin Bennett did in last year’s IHC final Photo: Denis Byrne

LAST year’s intermediate championship produced some great games and the clubs that reached the knock out stages will be anxious to go one better than 12 months ago. Easier said than done for those teams as the championship starts tonight (Tuesday) with the meeting of Ballypickas and Trumera.

Like the Premier Intermediate there are several contenders and like all other championship nobody knows until the first round is played who the real contenders will be.

Last year Mountmellick and Borris/Kilcotton played out a thrilling semi-final that saw Borris/Kilcotton edge the verdict in the closing minutes and give them a place in the final. They had been one of the most consistent teams all year having reached the league final and eventually losing to Camross in a well contested game at Shanahoe.

Will Borris/Kilcotton be favourites to capture this year’s title? Not necessarily because they have promoted one or two to their senior ranks and they are likely to remain there. That said, they have plenty of young players but like all senior clubs it depends how many are promoted.

I think we can safely say Borris/Kilcotton will be expected to be involved at the business end of things.

Last year’s other beaten semi-finalists, Clough/Ballacolla were bitterly disappointed. They had Camross on the rack but allowed them back in to the game in the third quarter and once the men from Derrynaseera got their noses in front there was no holding them.

Mountmellick enjoyed a great year and their three games with Ballypickas saw them improve with every outing. But it maybe took too much out of them and of course with them there is also the football factor to take into account.

They have trained well and engaged in several challenge games but are in a difficult group. Borris/Kilcotton will be favourites while Clough/Ballacolla, who are likely to lose a few to senior, will be determined to go one better than last year. Their clash with Mountmellick will decide who reaches the semi-final along with Borris/Kilcotton?

Who will accompany them?

Ballypickas played great last year but Mountmellick eventually wore them down and it will be difficult, but not impossible, to reach those heights again.

Clonad are here again. After surviving senior relegation for years they eventually caved in and are now facing a relegation scrap at this level, maybe unthinkable but quite possible. Last year they battled but lost and it will not get any easier.

Fifty years ago they denied Camross six-in-a-row senior titles but after being kings for many years they waited until 1992 to add to the George Conroy captaincy of 50 years ago. Paddy Norton led them to their first O’Keefe Cup 70 years ago and his nephew Pat led them to their last 38 years ago. They are a proud club but having one of the best facilities in the county and being well organised is not enough nowadays. Their day will come but not this year.

Trumera are never far away. They fell to Camross last year as did others. They look a good bet to claim second place in the group but there will be close calls for them with both Ballypickas and Clonad, whom they defeated to win their last title five years ago.

That was a great opportunity for the Sash but they let it slip. Maybe their clash with Trumera in this campaign might be the motivation but the red and white look the better bet to join Rathdowney/Errill.

Like all other grades there is probably four strong and four less stronger but in this grade there is possibly six contenders. Last year’s junior champions PRT made great progress in their maiden year capturing league and championship honours but like Rosenallis they are caught up with football. It will takes its toll but they will battle and their second half performance against the Harps made many sit up and admire them. But now they are playing senior hurling. It is a step up and this grade will produce competitive fare.