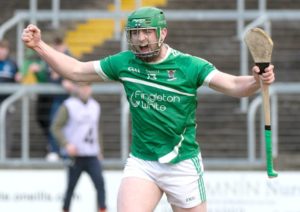 Who will be celebrating like Rosenallis’ Ronan Murray did last year at the full time whistle in this year’s Premier Intermediate Hurling Championship final            Photo: Denis Byrne

A NEW title, with many of the same faces but a few new faces promises to make this a very competitive championship. Unlike some competitions it looks as if there could be at least six serious contenders.

But as in other years it will depend on how senior clubs with a team in this grade use their panel.

In Group A Portlaoise, who were relegated last year, were champions two years ago when defeating The Harps in the final.

Portlaoise will be joined by the new kids on the block Colt-Shanahoe who without striking a ball will be one of the short priced favourites.

In this group are also Slieve Bloom intermediate champions of two years ago but who just staved off relegation last year getting the better of Clonaslee/St Manman’s.

But both are still competing at this level and it is likely both will be in the relegation scrap again. Maybe that’s a bit harsh and with being in opposite groups where the opposition is tough the face a stiff battle.

The Harps are in Group B along last year’s intermediate champions Camross. They are joined by Ballyfin and Mountrath who will be no pushovers.

With no league form to judge teams on, picking the top four here is difficult but surely Portlaoise and Harps long time senior teams will be making a strong attempt to get back playing senior hurling.

Last year the Harps lost both junior and senior A finals but they produced a great performance to win the minor championship. A few of these younger players could make their debut here. After all the disappointments they might even take the title but it’s going to be hard won, still they should make the semi-final.

Camross were impressive winning the 2019 intermediate title they are likely to promote a few to their first team which would benefit the Durrow club. One way or another these are the two most likely to make it to the semi-final.

Back to Portlaoise and their opening round game against Ballyfin is mouth-wateringly enticing. Ballyfin have had an exceptional few years in both codes and would like nothing better than to put one over their big town neighbours.

Portlaoise will be favourites to make it through to the last four and Ballyfin should be battling it out with the new combination, Colt-Shanahoe for the second semi-final slot in this group.

Last year Colt beat Clonaslee/St Manman’s and Ballyfin but suffered a heavy loss to Rosenallis in the semi-final. Shanahoe, their new partners, beat Slieve Bloom but failed to both The Harps and Rosenallis but no shame there.

They also reached the league semi-final playing their best hurling and two years ago, with their previous partners, almost scuttled Portlaoise in the quarter-final who then went on to win the title.

In the quarter-final last year they fell to Ballyfin who improved as the year progressed.

Last year Mountrath caused a surprise beating Colt but after that they lost to Ballyfin before beating Clonaslee/St Manman’s. In the quarter-finals they suffered a heavy loss to Rosenallis who were well ahead of the rest of the pack.

So might the semi-final pairings be? Likely Group A table toppers Portlaoise might well face Camross, now wouldn’t that be some crowd puller. The Harps look favourites to top Group B but just who will take the runner-up spot in Group A is almost impossible to predict. While it looks like Harps will be opposed by Colt-Shanahoe you most certainly cannot wire off Ballyfin.