In the 1920s the town was renamed Portlaoise – Today locals call it Mar Bra. 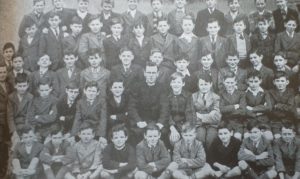 A FASCINATING illustrated book has just been released dealing with the history of Portlaoise.

Packed with 140 illustrations the 128 page book with previously unpublished images and material by best-selling author Joe Curtis is set to generate a lot of debate with those with an interest in the history of Laois and with Portlaoise.

In his work the author and historian Mr Curtis explores the visual history of Portlaoise as it developed up to modern age covering various aspects such as religion, education, health, business and law and order.

The book set off around the year 1548 when the English built a fort in the Laoghaise (Leix) region to guard against attacks by the O’Moore’s and o’Connorson the Pale.

In 1556, Queen Mary I decided on the plantation of the Irish territories, by confiscating their land and giving it to English settlers calling the area ‘Queen’s County’ and stipulating that Fort Leix (Port Laoghaise) being named Mary Burgh.

It makes its way through Queen Elizabeth I who granted a charter and made the town into a borough, a status it held until 1830.

The author looks at the various redevelopments that has taken place in the town over the ages and how the railway line influenced trade and commerce. How the convent played a vital part in the life of many generations education and how in the 1920’s the town was renamed Portlaoise and to this day locals call it Mar bra.