Ladies SFC Round 2 throws up some major shocks 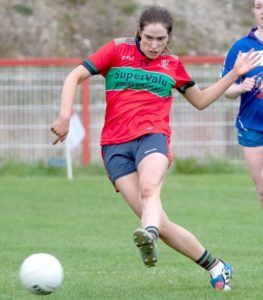 Last night’s second round of the Laois ladies football senior championships threw up a couple of major shocks.

Eight in a row seeking Sarsfields were stunned in Rathleague when Portlaoise struck late to grab a dramatic victory. This is something the Mountmellick based club are not used to.

However, by far the biggest turn about in fortunes from the opening round saw Timahoe shoot an amazing nine goals in the defeat of St Paul’s and that is after being hit for eight goals by Sarsfields in the opening round.

The final game saw a turn around in fortunes for St Conleth’s as they recorded their opening win of the championship when finding the net four times against neighbours St Paul’s.

In fact the second round of games was something of a goal-fest with no fewer than 21 goals being scored in the three games.

A total of 13 were accounted for in Timahoe where the home side beat St Paul’s by 9-13 to 4-5. While the scoreline might have surprised some, it would have come as no great surprise to see that Mo Nerney top the scoring list with a tally of 4-8.

In Rathleague two late points from substitute Leah Loughman proved crucial as Portlaoise got the better of Sarsfields. This game, a repeat of the 2018 senior final which Sarsfields won by four points, is proof that Portlaoise are nipping at the heels of the reigning champions.

Sarsfields had taken a three point lead into the half time break but Portlaosie out in a storming second half display and with Loughman coming off the bench to score those two crucial points the championship is wide open still.

The trip to Arles did seem to bother St Conleth’s as they got their championship back on track having nine points to spare over St Brigid’s. And that gap at the final whistle could be pout down to Laura Dunne who scored a stunning hat-trick of goals.