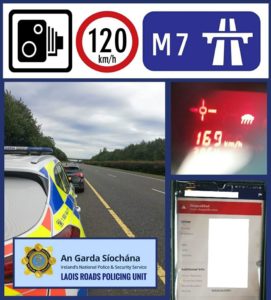 A BANNED driver jumped into the passenger seat of his car after he was caught doing 169km/h near Portlaoise yesterday.

When he finally stopped on the hard shoulder, the male driver leapt into the passenger seat, forcing his passenger out the car door onto the side of motorway.

The hair-raising escapade happened on the M7, when the Laois Roads Policing Unit was operating a radar speed check.

Gardaí pursued and pulled in a car, which was recorded roaring along at almost 50km/h above the motorway speed limit of 120km/h. The driver jumped into the passenger seat and tried to escape by forcing his passenger out of the car. He was immediately caught and arrested.

A check on the Garda Mobility App showed that the speeder was disqualified from driving. He was brought to Portlaoise Garda Station, where it was discovered that there were three warrants out for his arrest.

He was held in custody overnight and is to appear in court this morning. The car was seized by gardaí.