Injury time goal get Borris/Kilcotton off to a winning start 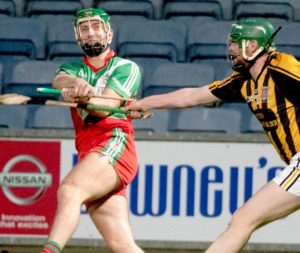 Emmett Jones’ injury time goal for Borris/Kilcotton against Camross got his side off to a winning start in this year’s championship               Photo: Denis Byrne

At long last, competitive GAA action returned to MW Hire O’Moore Park on Wednesday evening when a late goal proved the decisive factor as Borris/Kilcotton got off to a superb start with a win over Camross.

It had been nearly five months since the last match played in the Laois GAA headquarters and you couldn’t have picked a better game to get proceedings under way once again.

Both sides showed signs of rustiness, however this was outweighed by the high quality hurling that was on show for the 100 spectators in attendance.

Borris/Kilcotton generally looked that bit sharper but just could not shake off the Camross, who trailed by a point at the break, challenge.

It was nip and tuck all the way in the second half before in the 65th minute, a long free from Emmet Jones dropped into the square and with the help of a defensive mishap from Camross, the ball ended up in the back of the net.

Meanwhile, in Mountrath, the newly named Premier Intermediate Championship kicked off with the meting of Portlaoise and Ballyfin.

Just two points separated the sides at the half time break, Portlaoise leading 0-10 to 2-2 but on the restart Portlaoise took control thanks in the main to Aaron Bergin’s accuracy shooting 13 points over the hour.