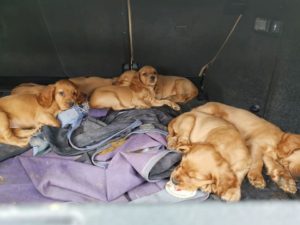 The seven puppies discovered in the boot of a car

GARDAÍ rescued seven golden cocker spaniel puppies from the boot of a car near the Laois-Kildare border today.

The puppies were discovered in a truck park at the new M7 plaza in Junction 14, Monasterevin and may have been stolen from the Laois area.

It was an excellent case of wuff justice, when gardai became suspicious of two cars in the truck park of the service area.

When they decided to investigate further, they found all seven puppies in the boot of one of the cars. The driver of the car could not give a reasonable explanation or provide evidence of ownership.

The dogs were not microchipped and have been handed over to the ISPCA, while gardaí have begun an investigation. Anyone who knows the rightful owners, or who has any information, is asked to contact any garda station.

The death has occurred of Breda McGrath- Errill