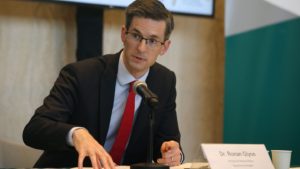 ONLY one new Covid-19 case in Laois was announced this evening, as public health experts defended the decision to place the county in semi-lockdown.

A total of 174 new cases nationwide were reported, of which 117 are in the other two lockdown counties of Kildare and Offaly. Kildare has 110, while Offaly has seven.

The National Public Health Emergency Team (NPHET) said that 118 of the new cases are “linked to the counties of Kildare, Laois and Offaly”. In other words, Laois has one new case.

Acting Chief Medical Officer Dr Ronan Glynn and other experts have defended the Laois lockdown, on the basis that while the number of cases is relatively low, the county had a higher percentage increase than any other county in the past two weeks.

Professor Philip Nolan, Chair of the NPHET Irish Epidemiological Modelling Advisory Group, said this evening: “The 14-day incidence per 100,000 of population in Kildare, Laois and Offaly is worryingly high. While the national incidence stands at 16.3 per 100,000, in Kildare it stands at 130.3, in Laois it is 69.7 and in Offaly it is 89.8.”

Dr Glynn said: “We are expecting significant numbers of cases to be reported over the coming days. Throughout this week, we have been testing all workers in facilities where outbreaks of COVID-19 have been identified, as well as close contacts of those people who have received COVID positive results. Tonight’s figures are a reflection of these measures with 118 of these cases linked to the counties of Kildare, Laois and Offaly.

“Our priority now and our reason for recommending the proactive measures announced last night, is to avoid these cases and clusters leading to widespread community transmission of the disease.”

There was shock in Laois yesterday evening, when NPHET warnings of a “serious” increase in the county’s cases were not reflected in yesterday’s figures. While there were 66 new cases overall in Laois, Offaly and Kildare, only five were in Laois.

In fact, it emerged this evening that the rise in Laois cases was four rather than five, as the official county breakdown – published a day after national figures – showed an increase of four, bringing the Laois total to 326 rather than the 327 reported last night.

Many people took to Twitter to complain that imposing a lockdown on Laois was unfair, as the daily increase was low compared to Kildare and Offaly.

In a letter to Health Minister Stephen Donnelly, Dr Glynn said that cases more than doubled between 22 July and 5 August, with “several significant and large clusters” in counties Kildare, Laois and Offaly.

There were 55 new confirmed infections in Laois during the same two-week period, while there were 150 in Kildare and 36 in Offaly.

Dr Glynn pointed out that a high proportion of confirmed cases in the three lockdown counties are aged under 45. In Laois, 93 per cent are under 45, compared to 75% in Kildare and 65% in Offaly.

He added that hospitalisations, critical care admissions, nursing home cases and deaths were not showing any worrying trends in the three counties. However, because of the age profile of cases, NPHET is worried there could be a “delay” in the spread to older and more vulnerable sections of the population in the midlands.

Figures also show that the vast majority of cases in the lockdown counties were transmitted through close contact with a confirmed case: Laois 91%, Kildare 94% and Offaly 71%.

There were still “few cases” as a result of community transmission but NPHET still has “significant concerns”, as all the relevant indicators are showing a “significant and increasing level of disease” in the three counties, according to Dr Glynn’s letter.

Last night, Taoiseach Micheál Martin announced that the three counties would be placed under local lockdown restrictions for two weeks, due to cases of the virus rising at a “concerning” rate.

Outbreaks in meat factories and Direct Provision centres were among the reasons cited for the increase in cases.

Nationally today, one death and 174 new cases were announced, bringing totals to 1,772 and 26,644 respectively.