John Hume: an instrument of peace 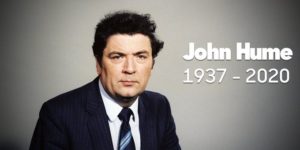 JOHN Hume put his devotion to what was right above what was best for himself and his life’s work was given its ultimate return in the ***Good Friday Agreement*** he signed 22 years ago.

Hume had a multitude of qualities that allowed him be a singularly resolute peacemaker during the Troubles, but his selflessness was surely the one that shines above all others.

That same agreement which brought peace to this island arguably cost the party he founded electorally in the years since he stepped back from public life.

This very nobility was clear, even in his retirement, and in 2010 he was named as Ireland’s greatest person

John Hume was born in Derry in 1937 and, like many of his generation, his Catholic faith was at the core of his upbringing.

He studied for the priesthood in Maynooth but ultimately returned to his native city to become a teacher after graduating with a degree in French and history.

His political career began as an organiser. He founded the first Northern Irish Credit Union and became president of the Irish League of Credit Unions (ILCU) while in his twenties.