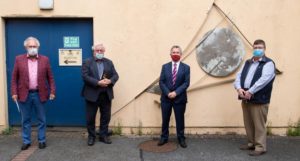 In Graiguecullen and Portarlington, it is difficult or in some cases impossible for residents to avoid crossing county lines, technically breaching the Covid-19 restrictions requiring them not to leave their own counties.

In four housing estates in Graiguecullen, Co Laois, residents cannot leave their estates without “crossing the border” into Co Carlow. People living in Portarlington on the Laois-Offaly boundary have a similar dilemma, as they cannot go shopping or visit friends and family nearby without leaving their own counties.

While in practice gardaí will adopt a common sense approach, Minister Fleming says a buffer zone should be established in the two towns to leave no room for doubt.

He made the call at yesterday’s emergency meeting of Laois County Council, which convened to debate the shock partial lockdown imposed on the county at midnight last Friday.

Cllr Fleming said there are four housing estates in Graiguecullen that are partly in Carlow. He proposed a buffer zone of two or three kilometres in the border area, so that people can travel freely without being worried when they see a checkpoint.

Minister Fleming agreed, commenting: “In those Graiguecullen estates, people can’t even go shopping a couple of kilometres away in Carlow without crossing the county border. There is a need for a small buffer zone of a few kilometres for these people.”

The junior minister said he has already made “a strong case” to ministerial colleagues for the establishment of buffer zones in both Graiguecullen and Portarlington.