No shocks as football makes a welcome return 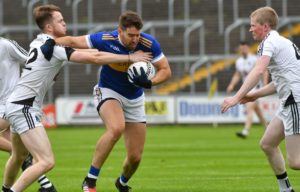 There were no shocks as the senior football championship got up and running once again tonight – three games played and all won by the favourites.

A clinical display from O’Dempsey’s saw them claim a well-deserved 12 point win over Courtwood in O’Moore Park tonight.

Micheál Finlay landed a hat-trick, with Matthew Finlay (2), Mark Barry and Dan McCormack also raising green flags to secure a comprehensive victory for the Killenard men. Dan Luttrell tried to keep Courtwood in the game, but it was to no avail as O’Dempsey’s were just too strong on the night.

Meanwhile, an impressive display from Sean Moore, who scored 1-7, inspired Ballyfin to a narrow victory over Ballyfin winning on a 3-10 to 2-12 scoreline.

The winners were slow to get going in Portarlington but eventually got their act together and come out on top in what was quite an entertaining game.

Newly promoted Rosenallis controlled the first half and approaching half time were leading 2-5 to 0-5. Ballyfin hit back with a goal and a point and at the break the minimum separated the sides, 2-5 to 1-7.

Another goal on the restart had Ballyfin in front and they were never to be headed again.

Over in Stradbally Portlaoise repeated last year’s opening round defeat of Ballylinan but not as emphatically as 12 months ago.

Six points separated the sides at the full time whistle, 1-8 to 0-5, but new Ballylinan manager Mick Lillis will have been happy enough with his side’s performance.

Portlaoise, also under new management with Kevin Fitzpatrick at the helm, were being put under pressure for long periods and it was not until the final quarter hat they finally began to pull away.

A Damon Larkin goal separated the sides at half time and by full time that gap had been doubled with two late Ricky Maher frees taking the pressure off the Town.