Change of venue did not put off Emo 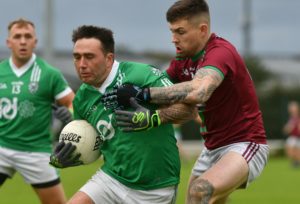 Storm Francis had taken its toll before a ball was even thrown in tonight. This afternoon the news broke that the two senior games had been moved to the LOETB Centre of Excellence and that the intermediate game between O’Dempsey’s and Portlaoise had been postponed.

Tonight’s senior games threw up two differing encounters, Emo emphatically accounted for last year’s beaten finalists, Killeshin while Portarlington were put to the pin of their collar to edge out Stradbally by jus thee points.

Emo really should have had this game wrapped in the opening quarter of this game. Patrick Hosey scored what will surely be the quickest goal of this season when he rattled the Killeshin net after 20 seconds.

They really should have had another three or four goals in that opening quarter but Killeshin goalie Shane Coakley denied them on each occasion.

Instead it was Killeshin who added a 2-2 in this period when playing with the strong wind in their backs. But Emo finished the half strongly to go into the break trailing by just a single point.

The second half was all one way traffic as Emo took complete control landing points with ease. In contrast Killeshin could make no headway against the wind and scored only a single point in the half, that in the dying minutes of the game when Eoin Lowry blazed a penalty over the bar.

And if all that was not bad enough Killeshin were reduced to 14 men with ten minutes remaining when Brian Lowry was issued with a straight red card less than two minutes after being introduced as a substitute.

Three late points from Ronan Coffey saw Portarlington get their Laois SFC campaign off to a winning start after a hard-fought battle with Stradbally on Tuesday night.

Having trailed from midway through the first half until the final ten minutes or so, Portarlington managed to grind out their best form when they needed it most. Up to then, Stradbally had managed to keep their noses in front with a battling display, but they just couldn’t fashion a response when it was needed late in the game.

The win also came at a cost as Colm Murphy was forced off injured in the 38th minute.

Crettyard took the first step to regaining their senior status when they comfortably disposed of the Timahoe challenge in Graiguecullen on Tuesday night. The club on the Kilkenny border were still hurting from being relegated last year and have put in a huge effort in preparation for this years competition.

The result will come as a serious blow for Timahoe but they just avoided relegation last year and will need to improve if they are not to make the drop this year.

The scoreline of the night has to be in the ladies senior football championship where Portlaoise defeated Timahoe 10-21 to 3-3. That must score make the Town girls favourites for the championship given they have already beaten reigning champions Sarsfields in the round robin.