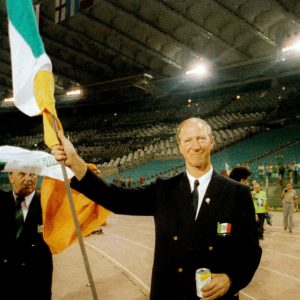 JACK Charlton’s recent death left many deeply saddened. An iconic personality, who won the hearts of the Irish people, he made people believe in themselves. His cap. His fishing. His pint. His long ball. His mantra – ‘put ʼem under pressure.’

Big Jack was very different to Bobby. The poetry of Bobby contrasted with the prosaic Jack. He would have been impressed by Southampton at present. They play with heart and guts. He also lived as if there was more to life than football. Jack was the strong centre-half. His ‘black book’ summed up his tough and rough play.

He was a much better player than he appeared. His crude coaching was more subtle than it seemed. He became a symbol of hope and confidence in Ireland. Nothing was now impossible. There was fun. There was the-devil-may-care outlook, which was orchestrated. He was even credited with playing a part in the birth of the ‘celtic tiger.’ He had come from a mining background and had gone down in the mines himself.

He spent his playing days at Leeds. Johnny Giles is still our man from Leeds. Lorimer. Hunter. Bremner and, of course, Revie. Leeds are coming again.

Leeds played a game where no quarter was given or expected. I even had the boldness to use Jack as a metaphor for the readings at Mass recently (effectiveness of God’s word). God waiting for us. Expecting the best from us. Giving us confidence. Go play. Make the best of everyday. Make the best of yourself. Have a go. Thanks for the memories, Jack. You lit up the country.

People who never knew anything about soccer became fans. Where were you during Italia ʼ90 or when that goal in Stuttgart was scored?