Nothing to celebrate in Arles 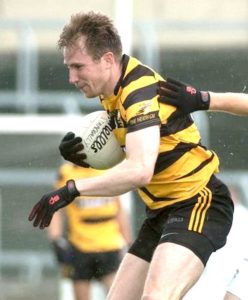 The Heath’s Daithi Carroll scored the game’s only goal in the defeat of Arles Kilcruise              Photo: Denis Byrne

There was nothing to celebrate in Arles on Wednesday night when their two teams, Killeen and Kilcruise suffered defeat in the opening round of the senior championship at the hands of Graiguecullen and The Heath respectively.

And then in an ironic twist Killeen and Kilcruise were paired together in the second round draw meaning at least one of them are assured of senior football next year.

Graiguecullen cruised to an easy opening round win over Arles-Killeen in O’Moore Park on Wednesday night.

A brilliantly worked goal, finished by Trevor Collins just before half time, set the platform for the victory.

Arles Killeen had been competitive for 25 minutes or so, but with an ageing side they just didn’t have the legs to keep with Graiguecullen in the second half. Collins’ goal saw Graiguecullen lead 1-5 to 0-4 at half time, and they outscored Arles 0-11 to 0-2 in the second half with Ross Hennessy, Lee Timmons and Brian Byrne all to the fore in a routine victory for Kevin Doogue’s side.

They mightn’t admit it, but this result was almost as good as winning the county final for The Heath. In recent year’s they have become the almost perennial relegation battlers. Defeating Arles Kilcruise in Stradbally on Wednesday night has assured them of senior football next year.

There was no denying The Heath deserved their victory controlling the game from start to finish. The winners raced into an early four points to two lead and by the break had a 0-8 to 0-4 advantage.

The Heath had increased that lead to seven points when Daithí Carroll struck for the game’s only goal in the 43rd minute.