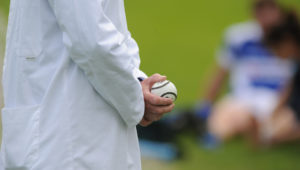 After the early part of the week was given over to the delayed football championships, hurling takes centre stage over the weekend.

There is a senior championship double header today in MW Hire O’Moore Park with premier intermediate championship games in Colt and Shanahoe.

This is a clash of neighbours either side of the Gulley Bridge and although they haven’t met often in recent years the honours usually go south of the bridge. However, last year Abbeyleix, after an awful run in the league, managed to pull off a win at home against the visitors who were unbeaten.

It mattered little afterwards and Abbeyleix survived relegation. Four years ago they contested a semi-final and again the honours crossed the Gulley.

On first round performance Clough/Ballacolla will be favourites although Abbeyleix ran up a sizeable score line a step up from last year. However, questions surround their first round opponents Castletown who looked very much off form, then played the second half with 14 players.

Clough/Ballacolla will relish this kind of game to improve on some of the shortcomings of the opening round and in the knowledge they cannot afford to lose as they know their third round clash with neighbours could be a banana skin. They have some of the best forwards in the county and a few more, if they click, could be equally as good.

Their defence blunted the champion’s danger men last time out but in Eoghan Fennelly Abbeyleix they have a sniper that could punish them. However the odds favour Clough-Ballacolla to maintain their unbeaten run.

Borris/Kilcotton are the happiest team after round one knowing they are in pole position to claim top spot. Not alone that, but 48 hours later their second team scraped home in poor conditions with many of their senior panel on show.

They beat their neighbours without their top scorer over the last few years. Although they trailed coming down the final stretch they refused to concede and picked off points to draw level. They then secured victory with a fortuitous goal but they all count.

Under new management, Borris/Kilcotton seem to have a greater spread of scoring power. They missed opportunities but refused to throw in the towel and got their rewards.

Will they be over confident? No not at all. They remember too well what Ballinakill are capable of. That was three years ago and led to them securing their only title after three hard battles with the men in maroon.

Ballinakill will not fear them either. After they suffered a heavy defeat to Rathdowney/Errill last year they looked a different proposition in their opening game this year.

The long serving Seamus Dwyer, Eamon Jackman, Brian O’Meara, TJ Lalor, Sean Downey, have blended in with Seamus Fitzpatrick, MJ Dunphy, Cian O’Shaughnessy and Ian Shanahan. And while not at his best last time out, Cha Dwyer makes them a formidable outfit for any opposition.

Still, Borris/Kilcotton will not want to stumble after clearing a bigger perceived hurdle and they will not be over confident and should sit on the top of their group on Saturday night.