Goals and cards rain down in O’Moore Park 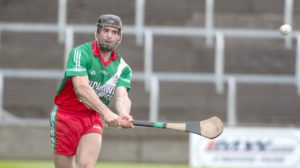 PJ Scully made a welcome return to the Borris/Kilcotton scoring 1-12 at MW Hire O’Moore Park on Saturday Photo: Denis Byrne

Clough/Ballacolla are the first team to ensure themselves of a semi-final place in this year’s senior hurling championship. They proved just too strong for an Abbeyleix side that battled to the end. But they will not be happy with the way this game ended when they had three players sent off in time added on, Abbeyleix had one players dismissed.

The second game in MV Hire O’Moore Park was a very disappointing encounter. Borris/Kilcotton were always going to be favourites to win but we really expected Ballinakill to put up more of a battle. Instead the men in maroon suffered a 21-point defeat.

As we reached the end of normal time in the opening game of today’s double header in MV Hire O’Moore Park the honours were well and truly heading to the Hawthorne. There wasn’t a whole lot left for the referee to do but blow the final whistle and put Abbeyleix out of their misery.

That was not what happened. Little did we know that over the next five minutes or so we would see more action than we had seen in the previous hour. As we say, there was a bit of a shemozzle in the Abbeyleix goal area, and a second one out in the middle of the park.

Time for action. Following discussions between the officials straight red cards were handed out to Abbeyleix centre back Ryan Peacock and Clough/Ballacolla substitute Eoin Doyle who was joined by his teammate Robbie Phelan on a second yellow. And within a minute Clough/Ballacolla were reduced to 12 players after Ronan Broderick picked up his second yellow.

Now back to the hurling. From the outset Clough/Ballacolla dominated this game. Three first half goals scored by Stephen ‘Picky’ Maher, who went on to score 1-12, Willie Dunphy and John Dwyer insured that no matter how hard Abbeyleix tried there was always only going to be one winner.

Abbeyleix displayed their battling qualities when Aaron Bergin raised a green a couple of minutes into the new half and for 20 minutes they matched their opponent score for score but could never close the gap.

Any doubt as to the final outcome was put aside in the 52nd minute when Willie Dunphy struck for Clough/Ballacolla’s fourth goal.

Borris/Kilcotton assured themselves of a semi-final place with the 21-point demolition of Ballinakill.

The winners wasted no time in posting their intent, Emmet Jones raising a green flag inside 30 seconds. Three more goals inside the opening 20 minutes from Joe Campion (2) and a beauty from Neil Foyle ensured there was only going to be one winner of this contest.

And as if those goals were not bad enough for Ballinakill they also had to face PJ Scully making a welcome return to the Borris/Kilcotton side. He went on to account for 1-12 of their tally, the other gaol coming from Aaron Dunphy.

Borris/Kilcotton face Rosenallis in their last group game while Ballinakill take on Camross in a must win game if they are to have any chance of making the last four.

Camross bounced back from the disappointment of an opening round loss to The Harps to claim a ten-point win over Mountrath.

With nine different players scoring it was the strength of the Camross team which ultimately saw them over the line, as the blend of youth and experience in their ranks makes them a formidable opponent at this level.

Camross needed a win after their opening round loss to The Harps and they did it in style seeing off Mountrath with ten points to spare. Mountrath just could not cope with a Camross side that seemed have sharp-shooters all over the field.