SFC Round 2 – Can Emo upset the odds? 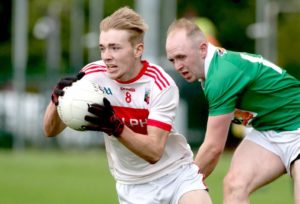 Emo’s Sean Greene gets away from Killeshin’s Adam Deering in the opening round Photo: Denis Byrne

Senior football teams face a quick turn around having played the opening round only a week ago. The opening game of the second round could hardly have been more mouth-watering, the meeting of near neighbours Emo and O’Dempsey’s.

After comfortably beating their other neighbours Courtwood, in the opening round, O’Dempsey’s face another neighbourly encounter when they take on Emo. The outcome may be hard to predict but one thin is fir sure, the Killenard outfit will not have it as easy as their opening game.

O’Dempsey’s have been knocking on the door in recent years, making it to the 2018 final, bit it is hard to judge just where they are at after round one. They were never tested by Courtwood being the totally dominant team.

Emo had eight points to spare over Killeshin first time out and looked very impressive with the way they moved the ball. They carved open the Killeshin defence and really should have scored at least another two or thee goals. They will hardly find the going as easy this time out.

O’Dempsey’s last met Emo in the 2018 quarter-final and came away with a six-point win and will be favourites to advance on Thursday. However, I am going to stick my neck out and go for Emo and their attacking style.