SFC Round 2 – Graiguecullen bound for a quarter-final place? 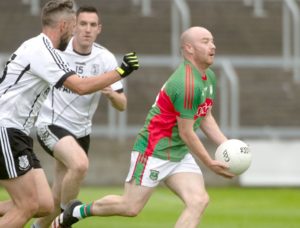 Graiguecullen’s Chris Hurley breaks against Arles Killeen in round one Photo: Denis Byrne

After last night’s exploits of two near neighbours, tonight the circumstances are somewhat different as The Heath come up against the club positioned on the very periphery of Laois, Graiguecullen.

The Heath will have been happy to have beaten Arles Kilcruise in round one, at least now they were assured of retaining their senior status and avoiding the relegation scrap. The last two years they have just about managed to hang onto their status and with that monkey off their back you never know how they might progress.

There was no denying The Heath deserved their first round victory over Arles Kilcruise controlling the game from start to finish. And it is a little ironic twist that they should now be drawn against Graiguecullen who beat the other Arles team, Killeen in their opening game.

The Barrowsiders didn’t just win the game, they crushed an aging Killeen outfit. So here we have another side it is hard to judge, were Graiguecullen that good or were Arles Killeen that bad. It has to be said that the letter looked toothless in that opening game.

That said I feel Graiguecullen will have too much in the tank for The Heath who might just have a bit of a hangover from their opening round win in so far as they might just be happy to have survived in the senior ranks.

Obituary – Killeshin and Laois say farewell to a goalkeeping legend

This Week Ten Years On sport was in full flow