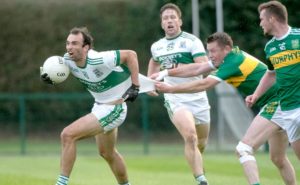 Portlaoise’s Gareth Dillon has his jersey tested by Ballylinan’s Ciaran Fennell in the opening round Photo: Denis Byrne

What a day of action we have to look forward to today.

County champions Portlaoise will be out to take the next step in the retention of their title but they face a tough task in the shape of Portarlington.

The opening game of the day is another neighbourly battle with Stradbally taking on the lads from up the road in Kellyville, St Joseph’s, a game that is all the juicier in that the losing side will be caught up in the relegation scrap.

The final game of the day is the unique pairing of Ballylinan and Rosenallis, two teams who have never before met at senior level and where defeat will mean a place in the relegation semi-final.

There was the time when even the notion that either of these sides could possible be caught up in a relegation battle would have been scoffed at. But the times they are a changing. This is another one that even the bookies cannot decide on.

In the opening round it late points from Ronan Coffey to ensure Portarlington got their campaign off to a winning start after a hard fought battle. Stradbally had managed to keep their noses in front from midway through the opening half with a battling display, but they just couldn’t fashion a response when it was needed late in the game.

In the opening game of this year’s championship, St Joseph’s were denied at the death by a remarkable Ballyroan Abbey recovery. The late winner left the Kellyville outfit dumbfounded, as did the decision 24 later to postpone all games in the county on government advise. So here we are four weeks later and we have to wonder how the break has affected them.

Stradbally were caught up in last year’s relegation scrap and while reports are that the team have reacted positively to Greg Ramsbottom’s term as manager, I think the Saints might just have enough to see this one out.

Just under 12 months ago these two met in the championship semi-final and Portarlington were left scratching their heads as the final whistle blow. There were not the first, and will not be the last, to wonder how they had let the Town off the hook.

Portlaoise had to call on all of their experience to eek out a win. Midway through the game things were not looking good for them, they were being totally outplayed in all sectors.

So how will it pan out this time? You might say it is a time of transition for Portlaoise, they have a new manager in Kevin Fitzpatrick and of the team that fielded against Portarlington last year only seven played in their opening round win over Ballylinan.

In contrast 11 of the Portarlington side from last year were on view against Stradbally. They may not have had it all their own way but they deserved their win.

Portlaosie might not have looked particularly impressive but then how often have we said that about Portlaoise teams. How will the cope without the leadership of the retired Brian ‘Bruno’ McCormack and Brian Mulligan? Only time will tell but I think they will just about survive this one.

On paper this should be a fairly straightforward and clear-cut prediction. But is it?

All of this is a bit of an adventure for Rosenallis, their first year contesting the senior football championship and the only club in the county participating at senior in both codes. Ballylinan meanwhile have had the moments, maybe not a lot, but they are football through and through. Don’t forget just three years ago they made it all the way to the county final only to lose out to a rampant Portlaoise.

However, don’t expect them or Rosenallis to that far this year. I expect what is on both teams mind is to just win this game and ensure another year at senior.

Portlaoise were again their opponents in this year’s opening round and had Gary Walsh any assistance up front there might have been a different result. As it was they lost out on a 1-8 to 0-5 score, Walsh accounting for all their scores.

Against Ballyfin in the opening, it was the experience garnered over the past few years that saw them put a poor first half performance behind them and gouge out a deserved win in the second half to see off Rosenallis. Experience should be the winner again in this game.