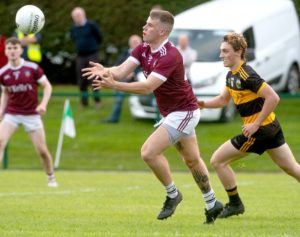 Dylan Waters (Arles Kilcruise) releases this ball in his sides opening round game against The Heath Photo: Denis Byrne

The day’s opening game features one of last year’s surprise packages, Ballyfin and Ballyroan Abbey. This should be a cracking game as on paper there seems to be little between the sides and Ballyfin would love to take a step closer to repeating last year’s exploits.

The final game of the second round brings together the other astonishing team from last year, Killeshin who made it all the way to the final, and last year’s intermediate champions, Courtwood. Could this game end with county finalists facing relegation 12 months later?

Now this is a real head scratcher. The man who can predict a winner here must have some insight into the game.

Twelve months ago Ballyfin threw the form book out the window by advancing to the semi-final and only missed out on a place in the final when losing out to Killeshin. They had dew with the Carlow border side on their first, and probably should have beaten them, but in the replay Killeshin had the better day but still only won by four points.

Ballyroan Abbey too had a decent enough run exiting the championship in round three when just a single point separated them and St Joseph’s.

So what about this year? In an ironic twist just a single point were to separate Ballyroan from St Joseph’s again this year but victory went to the Sky Blues this time around.

A single point was the difference also between Ballyfin and Rosenallis so who has the edge here? Even the bookies can’t separate these two.

Go back two year’s ago and Ballyroan Abbey made it as far as the quarter-final but in contrast Ballyfin were very fortunate to survive in the senior ranks when getting the better of Clonaslee/St Manman’s in the relegation final.

Given that Ballyfin are trying to compete on both the football and hurling fronts I am going to opt for Ballyroan.

It is really hard to believe that in the past decade one or other of these two teams have contest no fewer than four county finals, granted losing all four, Arles Kilcruise in 2010 and ’12, Arles Killeen in 2013 and ’14. But nevertheless it was some feat for two small rural clubs pulling from the one area.

However, it is unlikely either side will see those days again, in the near future at least. Both outfits are showing the signs of aging and unless a lot of young talent can be unearthed from somewhere you would honestly have to fear for the future of both clubs.

But enough pontificating, let’s looks to the future, well to next at least. Both sides suffered fairly severe beatings in the opening round. Arles Killeen went down to Graiguecullen by 13 points while The Heath had seven points to spare over Arles Kilcruise.

So where does that leave us? Last year Arles Kilcruise survived in the relegation semi-final while 12 months earlier it was Arles Killeen who just about held onto their place.

However on this year’s opening round displays I am going to opt for Arles Kilcruise.

You would be not expecting one year’s finalists to be facing into a possible relegation scarp 12 months later after just one game in the championship. But that is the conundrum faced by Killeshin next Sunday.

The men in green were the real surprise of last year and they are probably still thinking about last year’s final when Portlaosie just got the better of them by a single point. And maybe that is something that still rankles. But they will need to park that up if they are to survive in this year’s championship.

Courtwood are of course the newly promoted side and found the going tough in their first game in the higher grade. They got a 7-11 to 1-17 drubbing at the hands of their close neighbours O’Dempsey’s but will have to put that to the back of their minds for this weekend. Mind you scoring 1-17 wasn’t bad going.

Killeshin had their defence torn to shreds by Emo who really should have had another three or four goals in the opening round and Killeshin will really need to tighten up in this sector. That said I thing their experience at this level will stands to them today.