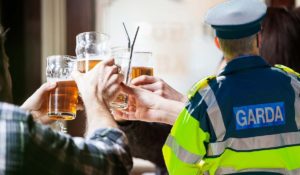 FINDINGS of a survey recently carried out to determine people’s views on the newly introduced legislation giving gardaí additional powers saw 80% of those surveyed agreeing.

The survey was carried out by iReach Insights from Thursday 3 to Tuesday 8 September and received over 1.000 responses.

The survey question was included in the Nationally Representative iReach Consumer Decisions Omnibus.

In a statement on the survey findings a company spokesperson said: “Following the additional powers of enforcement appointed to the gardaí, iReach has surveyed adults in Ireland to determine their views on this matter and other attitudes surrounding the aftermath of COVID-19.

The question was: “Do you agree the new legislation to give gardaí additional powers of enforcement (which will allow them to close down pubs for up to a month if they are in breach of public health guidelines)?

The survey also found that (70%) of adults have made a conscious effort to support local businesses due to the impact of COVID-19.