Name this Mountmellick team that won the 1968 Laois Intermediate final 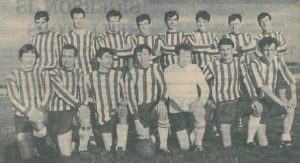 Thanks to one Laois Nationalist reader who provided us with this copy of a page from the Gaelic Weekly News.

It provides the history of the Mountmellick team dating back to its formation at the turn of the century by the late Phil Bray and EJ Laffey.

It was nine years later in 2019 that they won their second County Junior football final.

The 40s brought a flourish of silverware to Mountmellick.

In 1941 they won both the county hurling and football championships as well as the Féis Shield.

Many players featured on both teams such as brothers John, Pat and Ted Laffey as well as Don and Tom Murray, Eddie and Jack Conroy, Paddy and Gerry Horan and Billy Murphy.

So who are these players in the photograph?