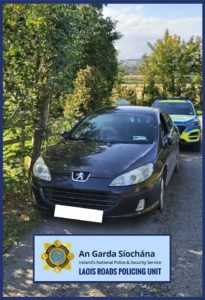 A STINGER device and the Garda helicopter had to be deployed in a dramatic chase in Laois today.

A driver put lives at serious risk on the road between Portlaoise and Stradbally, when he was involved in a series of dangerous driving incidents at high speed.

Gardaí finally managed to stop and arrest the driver by using a Stinger device in Stradbally town, which deflated the car’s front tyres. The Garda helicopter was also called in to assist local gardaí during the hair-raising pursuit.

The drama began this afternoon, when the Laois Roads Policing Unit chased the car along the N80 between Portlaoise and Stradbally but it failed to stop.

Gardaí said the Peugeot was involved in “multiple dangerous driving incidents” during the terrifying chase and repeatedly failed to pull in, as it was pursued by a patrol car with flashing blue lights and siren activated.

After other units were alerted, a Stinger device was deployed in Stradbally town which successfully deflated the front tyres on the vehicle. The driver was arrested at the scene.

The driver was transported to Portlaoise garda station and has been charged to appear before Portlaoise District Court.

Members of the public who witnessed the incidents can contact the Roads Policing Unit at Portlaoise Garda Station on 057 86741000.